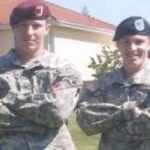 CANDLER —Jo Dean Galloway shakes her head as she considers the cruel irony of her grandson’s situation.

Jake Freeland made it through deployment in Afghanistan as a US Army Scout, jumping out of planes into enemy territory behind enemy lines.

But after his return to Fort Bragg, he lost control of his motorcycle May 29 and sustained a spinal injury that left him paralyzed from the mid-chest down.

“He came through war and then this happened,” Galloway said.

Freeland, 22, is in Chapel Hill undergoing physical and occupational therapy. He is scheduled to be released July 16 and will return to Candler to live with his mother, Darla Freeland.

Freeland’s medical costs are covered, but work needs to be done on his mother’s house to make it accessible for him, and he is scheduled to be released July 12.

“They need a ramp, wider doorways — a hospital bed is $3,000,” said Nancy Smith, a family friend who is coordinating a fundraising event July 18 to help pay for some of the modifications to the house.

Jake will need a bed that can be raised and lowered so he can get in and out of bed. He also will need a modified, wheelchair accessible shower.

“He went to Afghanistan to protect us, I think this is the least we can do for him,” Smith said.

‘This won’t stop him’

Darla Freeland, a single parent, has worked for Head Start for the last 18 years. She raised Jake and his brother, Josh, 25, and sister, Christy, 20, on her own. The family attends Abernathy United Methodist Church on Patton Avenue, which is where Smith came to know them.

“I didn’t realize how much there would be to learn,” Darla Freeland said. “He’s been in PT and OT and I’ve been in classes learning about all the things that could go wrong.”

Still, she said, it could be worse.

“You take what you get and go with it,” she said. “It could have been so much worse. He could have died or had a terrible brain injury.”

Galloway believes her grandson will learn to cope with the restrictions this injury will place on his life.

“He’s always been incredibly active,” she said. “But he’s stubborn, too. This won’t stop him.”

Although Josh Freeland plans to make the Army his career, Jake had planned to leave when his enlistment was up and go to college at UNC Asheville.

“He was planning to go to UNCA, and I don’t think that will change,” Galloway said.

Darla Freeland said her son’s spirits are good, although he has had a couple of infections. He is eager to learn to do things for himself.

“It’s like watching him go through his early childhood all over again,” she said.

Because he was still on active duty when the injury happened, Freeland’s medical costs are covered.

“I don’t know what will happen after he’s home,” she said. “The Army hasn’t given us a whole lot of answers yet, but they have given us a lot of support in other ways.”

With her son scheduled to come home in about a week, Darla Freeland has to think about getting renovations to the house done quickly, but she is not one to panic.

“I’ll get him into the house somehow,” she said. “I’ll rig something up with super glue and duct tape if I have to. We’ll worry about the rest later.”

Friends and family of Jake Freeland hold a fundraiser, Barbecue & Bluegrass, 6-9 p.m. July 17 at Abernathy United Methodist Church, 1418 Patton Ave., Asheville. Cost is $6 per plate. Contributions will be accepted. Checks can be made out to Abernathy UMC, with “Josh Freeman Fund” written in the memo line.

A bank account has been opened at Asheville Savings Bank to take contributions. Make checks payable to Jake’s Fund.