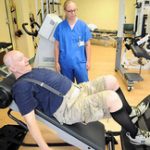 Syracuse, NY — The Syracuse VA Medical Center has opened a new outpatient rehabilitation clinic and a prosthetics lab to serve the growing number of soldiers coming home from war with injuries.

The clinic and lab will support the VA’s long-awaited spinal cord injury center. Construction of the 30-bed inpatient unit, part of a six-story $78 million addition, is expected to begin in September. The VA expects to award the construction contract for the project in the next few weeks.

The rehab clinic is five times larger than the VA’s old clinic and is staffed by seven physical therapists. It provides exams to veterans with spinal cord injuries and other problems.

“It can be anything from a combat-related injury all the way to someone who has a problem related to a decline in function due to age, illness or disease,” said Karen Hughes, physical therapy supervisor.

The clinic is equipped with a ceiling track system with a harness used to secure patients during rehabilitation.

The VA used to contract with outside vendors for artificial limbs and other prosthetic devices for patients. It now makes most of these devices in the new lab. Joseph McCreary, the VA’s chief of prosthetics, said the VA anticipates a surge in demand for spinal bracing orthotics when the new spinal cord injury center, which will serve veterans from across Upstate New York, opens in 2012.

In addition to the spinal cord center, the center will house a therapeutic pool, eight operating rooms, an expanded dialysis unit and expanded outpatient services.

by James T. Mulder / The Post-Standard