She sings, she dances, all from her wheelchair 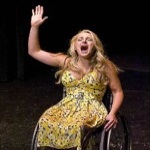 Ali Stroker is a ball of energy. It is exhausting just being in the room with her. Ali came by our offices the other day for a meet and greet because she is going to be a Reeve Foundation Ambassador.

She is 21, and was paralyzed in a car accident at the age of 2. She just graduated from the Musical Theatre Conservatory at New York University’s Tisch School of the Arts. She could be the next big thing on Broadway.She sang for the Reeve Foundation at the Born for Broadway event, and just in the last few weeks she has been in two other shows. Thursday and Friday she appeared with Tony Award winner and 2009 Emmy Award nominee for 30 Rock Jane Krakowski in Mrs. Sharp.

She has to be the next big thing. You can’t help but to fall in love with her immediately. She held the room captivated for 30 minutes with the story of how she and her brother were injured in that car accident, and how her mom and dad tough-loved them into recovering.

I quickly realize that she has no fear, no topic is off limits, and she has an opinion on everything.

Most revealing was when she admitted that she never thought about getting involved with groups like the Reeve Foundation in the past because she didn’t think of herself as disabled. She still doesn’t, mind you. This is not uncommon I am finding. It’s not about walking for her, it’s about living. I think we enticed her with all the work we do to help people live.