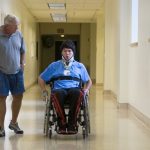 MOUNT SHASTA – It’s been an emotional few weeks for 18-year-old Corben Brooks, who’s had to say goodbye as his friends, one by one, head off to college.

He might have been leaving, too, had a football injury three days into his senior year not left him mostly paralyzed from the chest down. But the former multisport athlete and accomplished student has been on his own journey, learning how to adapt to a life no one anticipated.

“It’s been like a roller coaster,” said Corben, who suffered a broken neck and spinal cord injury during a practice scrimmage on Aug. 22, 2008. “It’s definitely had its ups and downs.”

His father, Kevin, had volunteered as assistant coach for his son’s last year at Mount Shasta High School and saw him go down. Neither he nor his wife, Ronna, had any idea how serious their son’s injuries were.

But they would learn Corben required a seven-hour surgery, a three-month hospital stay and ongoing therapy. They would also learn just how much people cared.

Contractors and suppliers donated their time to make sure a wheelchair-friendly addition was built onto the house in record time. Pizza nights, magnet and T-shirt sales, and other fundraisers popped up.

“One thing it did was bring the community together,” said Ronna, 43, who with her husband owns Brooks Complete Auto Repair, a towing business, and Thunder Mountain Motorsports, which specializes in custom motorcycles, cars and boats.

In school sports communities up and down the valley, strangers pitched in to help and lend moral support, for which the family is grateful. To this day, friends stand by.

“A couple times a week, people will come by with dinner,” said Kevin, 44. And every Friday during football season, stylists at Karen Davis’ hair salon and employees at Scott Valley Bank wear blue and gold shirts bearing Corben’s name.

“It’s over a year,” Corben said. “I thought people would forget about me. I couldn’t have gotten this far” without that support.

Sweethearts since seventh grade and apart only for their college years, Corben’s parents have greeted this hardship the same way they’ve done everything else – as a family. Corben has two brothers, Bryson, 16, and Mason, 11, and a 9-year-old sister, Cami.

“We look at this as a ‘we’ thing,” Kevin said. “We are a very tightknit, loving, strong family.”

When Corben spent 10 weeks this summer at Project Walk, an intense recovery program for spinal cord injuries in Carlsbad, his mother and his siblings were by his side.

Davis and her husband, Mike, the school’s varsity football coach and Kevin’s best friend, have been close to the Brookses all along.

“They’re amazing parents,” she said. “It’s definitely not anything anybody’s forgotten. A day doesn’t go by when we (don’t) just want him to get better.”

While allowing she has “dark days,” Ronna is philosophical.

“Our situation now, in all honesty, is that we have Corben and he’s not brain-injured,” she said. “He can go on and contribute and continue to be very productive.”

Kevin says perhaps it’s easier for him to see his son’s progress over the past year than it is for Corben.

“The hardest part, too, is not knowing,” Corben said. “It’s nice that there’s hope but at the same time, it’s still messing with you. It’s definitely bittersweet.”

He was back in the classroom in March and graduated with his friends. Currently, he continues his physical therapy, along with acupuncture and oxygen treatments, and has added an online environmental science course to his activities.

The “ideal” situation for him now, he says, would be to return to Project Walk and take college courses at the same time.

“So far I’ve learned, don’t take anything for granted,” he said. “And patience.”

Grandparents Need to Be Aware of the Critical Need to Buckle-Up...