Regaining independence after being paralyzed at 17 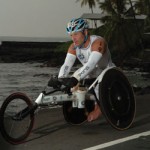 On March 13, 1991, while preparing for a motorcycle race competition, my bike collided with a rock and my life changed forever. I was airlifted to a Boston hospital, where the emergency room physician told me that I had severed my spinal cord and that I would never walk again.

I had been racing motorcycles for 11 years and had incurred numerous minor injuries, but I never thought I’d be permanently injured. I felt absolutely helpless, like there was no one in the world who could do anything to help.

While I was still in the hospital, my parents told me that I had two weeks to feel sorry for myself and then it was time to get to the task at hand: work on getting better. Over the next five weeks, as an inpatient in rehabilitation, I learned to live without the use of my legs. It was extremely tough, as I struggled with going from being an active 17-year-old to not being able to dress myself. The simplest tasks, like moving from my wheelchair to the car, were daunting. But I took my parents’ advice to heart, and I worked hard in rehabilitation and went back to high school.

After a few months, I began to move toward regaining my independence. But just as I was making progress, I began having extreme spasticity in my trunk and legs. The spasms were so intense that they’d pull me out of my wheelchair, and were so strong they knocked my hip out of joint. Doctors had to find a way to control the spasms before surgically repairing my hip. This turn of events was frustrating, as I was so accustomed to simply being able to work harder to achieve goals or overcome obstacles. This time it was different: It didn’t matter how hard I tried, I had to rely on doctors to help me get better.

At this low point, I met Joseph Madsen, MD, a neurosurgeon at Children’s Hospital Boston. I remember being instantly put at ease by him: He understood my challenges and how limited I felt by the spasticity. He recommended trying a treatment that was new at the time, called intrathecal baclofen (ITB) therapy. It’s basically an implanted pump that releases a concentrated muscle relaxant directly into cerebral spinal fluid. It controlled my spasms right away. Since that day, my parents and I have always looked at Dr. Madsen as a superhero of sorts.

Charles Berde, MD, of Pain Medicine, managed my pump, and he’s not a typical physician, either. I’ll never forget how many times he told me to get a cell phone because he wanted me to be able to call him if I ever ran into trouble. They both treated me like a person, not as a patient in a wheelchair. They gave me my independence back and, for me, that was everything. My independence restored my dream: to get healthy and train for—and some day compete in—races like the Boston Marathon.

Following my hip surgery, I began to race again—wheelchairs instead of motorcycles. I started with smaller road races and eventually completed my first Boston Marathon in 2003. Now, I’ve done 140 road races, 29 marathons, 19 triathlons and, most recently, the Ironman Hawaii, where I came in second. It was a 2.4 mile swim (I used just my arms), 112 mile bike ride (I hand-cycled), followed by a 26.2 mile marathon (I used my racing wheelchair). When I compete in Ironman, I compete directly with able-bodied people. To say the least, my mobility is important to me, and it lets me fulfill my need for competition and gives me purpose. As I reflect on what has allowed me to overcome my accident, I feel there are two factors. I’ve always had a positive attitude, which my parents instilled in me from the start, and it’s allowed me to persevere. Second, it’s the people who have cared for me and who I’ve surrounded myself with that have made the difference. It starts with my family and is extended to my doctors.

I’ve transitioned to an adult hospital, but I’ll never forget Children’s. Recently, I took a job as an ITB therapy consultant with a company that manufactures the pumps. What attracted me to the job is the connection I feel with its mission of restoring health to others. I feel a sense of satisfaction when I share my story and help others who suffer from spasticity. In fact, I’ve been reunited with doctors Madsen and Berde in my role, since it’s my responsibility to educate health care professionals about advancements in the therapy. Recently, it all came full circle as I worked with them in the operating room to help ensure the devices are implanted and programmed correctly. I like that I’m able to contribute to their mission and give back, in a sense.

I’m writing this not to talk about myself, but to impress upon Children’s staff and volunteers that what you do is immensely vital to patients like me. It’s all about you, and the care and love you show your patients. It may not seem so glamorous all the time, but from my point of view, you are very special.

A monkey’s mind over matter