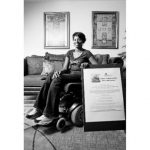 Elkridge woman vows to return to her feet

Perneita Farrar’s dream is to walk again, and to do it in her beloved high heels.

“One day, I’m going to walk in these shoes,” she said of her 100 or so pairs of heels. “I don’t want to be wearing orthopedic shoes.”

The 36-year-old Elkridge woman, a self-described “girly girl” who uses a wheelchair because of a spinal cord injury, is working toward that goal as she prepares to travel to California in December to participate in an exercise-based rehabilitation program.

The program is run by Project Walk, a nonprofit organization that helps patients regain mobility after spinal cord injuries.

Farrar hopes to raise money for her rehabilitation trip through a pancake fundraiser Saturday, Nov. 14 at Applebee’s restaurant in Columbia.

Farrar’s injury occurred in 2005 as a result of an infection her body was unable to ward off because she suffers from lupus (with which she was diagnosed 10 years prior), a chronic auto-immune disease in which the body’s immune system attacks itself and causes tissue damage to the body’s organ systems. The infection spread to her spinal cord, causing her to become paralyzed from the waist down.

“It was just too much trauma in my body,” she said. “From then on, I was told I would never walk again.”

Doctors gave Farrar little hope for a full recovery, which she said also led to an estrangement from her family.

“I was pretty much beaten up, from the inside out,” she said of this time, during which she was on a feeding tube for two years and unable to talk.

Farrar was in and out of hospitals, rehabilitation centers and a nursing home for 884 days.

In February 2007, a friend purchased Farrar a laptop. The gesture turned out to be a turning point for Farrar, who decided she had had enough of living at the nursing home and wanted to be more independent.

“You’re left there for one reason … to die,” Farrar said of living in a nursing home.

She began researching and reaching out to various organizations in hopes of becoming more independent and improving her life.

The first step for her was continuing her education.

At the onset of her paralysis, she was a graduate student at the University of Maryland but was unable to complete her degree because of her illness. She reapplied and is working toward a master’s degree in education and instructional technology. She is planning to graduate in May and holds a 3.7 grade-point average.

She also secured moderate-income housing in Elkridge with help from the state in September 2007.

All of this, she said, has made her feel alive again.

“It pretty much allowed me to choose life again,” she said.

Taking her newfound independence in stride, Farrar is an active member of Celebration Church in Columbia, where she leads small group ministry.

“I’ve watched her life resurrect in terms of her relationships with people,” said Larry Walker, a pastor at the church.

Farrar has been able to reconcile with her family as well.

“What she’s learned with us is that forgiveness is an important part of moving on,” Walker added.

To raise funds to participate, she is holding a “Flapjack Fundraiser” at Applebee’s Neighborhood Grill and Bar, at 8335 Benson Drive in Columbia, this Saturday, Nov. 14, from 8 to 10 a.m. The cost is $6 and includes all-you-can-eat pancakes, sausage links, coffee and juice.

She is coordinating her fundraising efforts through the nonprofit National Transplant Assistance Fund & Catastrophic Injury Program.

While she doesn’t know to what degree the rehabilitation will work for her, Farrar — who is now able to take a few steps with a walker — is cautiously optimistic.

“It’s not a miracle cure. They don’t claim to be … the quadriplegic heaven,” she said of the program. “I would be crazy not to try.”

For more information about Farrar or to contribute toward her rehabilitation program, go to www.catastrophicfund.org and type Farrar’s name in the “Find a patient” search.