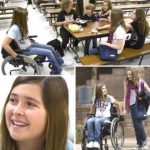 Five weeks after collapsing on a soccer field with an injury that paralyzed her lower body, Mackenzie Saunders returned to school this week.

Her fellow sixth-graders at Kyrene Akimel A-al Middle School in Ahwatukee saw Mackenzie, 11, get a special key to use the elevator, do wheelies in a child-sized wheelchair and show a confident smile to tell the world everything is okay.

Only her family and a few friends have seen the weeks of intense preparation it took for her to return to life outside the hospital.

“I can walk a little bit, but it is hard,” Mackenzie said.”My legs are really week, and my knees feel like Jell-O.”

Mackenzie was partially paralyzed Dec. 19 after a vertebra in her lower back was broken in a collision with another player during soccer. The fracture bruised and cut the blood supply to her lower spinal cord, at first leaving her unable to move her lower body.

Doctors say surgery does not help this type of injury heal any faster. The injuries must heal on their own while Mackenzie learns to walk again.

With help from doctors and therapists at Barrow Neurological Institute at St. Joseph’s Hospital and Medical Center in Phoenix, she is gradually recovering.

The expectation is that Mackenzie will eventually be able to walk, run and possibly even return to playing soccer. But it is unclear how long that will take.

“She started out only being able to get dressed if she was lying in bed,” said Abby Glen, the Barrow occupational therapist who has worked with Mackenzie since she was admitted there Dec. 28.

“Now she can stand up and get dressed without even holding onto a walker. It took her three weeks to get to the point where she could stand without the walker and move dynamically,” Glen said.

Glen and other St. Joseph staffers say the speed of her recovery has been remarkable – even for a child Mackenzie’s age.

“Kids are a lot more resilient than adults. Their recover is faster. They just want to be normal,” said Gretchen Pace, the St. Joseph child life specialist who has coordinated her return home.

“And with Mackenzie, everything in rehab was cool,” Pace added. “To her it was all exciting and awesome. That is a huge component of getting well – having a positive attitude and being willing to try new things.”

Still, Gary Saunders, Mackenzie’s father, said he and her mother were nervous about her returning to school so quickly.

“She was getting such outstanding care at Barrow and making so much progress, we wanted her to stay at least another week,” he said.

“They had her going all day long. Once she got home we knew she was not going to get that kind of care,” Gary added. “We were worried about her going backwards. But she was antsy get back to school and normal life.”

The Saunders, Mackenzie’s school and the St. Joseph medical staff agreed on a plan for her return to Akimel: She would take all her normal classes by moving around the school in the wheelchair.

Even though Mackenzie can walk with support from a walker and take as many as 10 steps without holding on to anything, the wheelchair protects her from possible re-injury. She leaves class a few minutes ahead of other students so she has a clear run of the hallways. And she has a student buddy with her to help her through the cafeteria line and pick up anything she might drop.

Ten days ago, Mackenzie, her parents and St. Joseph staffers went to Akimel to prepare for her first day back.

Mackenzie practiced opening heavy doors around the school, using the school elevator and transferring from the wheelchair to a chair at a classroom desk.

“It was really exciting to be back,” Mackenzie said. “But I get really tired too.”

The hospital team answered questions from students who were surprised to see their their athletic, vivacious classmate in a wheelchair.

“As soon as she walked into the school she got mobbed,” Pace said. “She was hugging everyone and showing how she does the wheelies.

“Then I explained to the students why her legs aren’t working. She had a fracture in her back that hurt her spinal cord. The spinal cord is like a telephone. Right now the phone has a fuzzy connection. Even though her muscles are still strong, her legs aren’t getting a clear message about how to walk.”

One concern of both Mackenzie and the adults who are helping her is that another child might get the idea that playing soccer frequently leads to paralysis: It doesn’t.

“Everybody believes she will be walking and back to normal . . . that she is going to recover 100 percent,” said Akimel principal Ernest Brodersen.

Mackenzie also wants everyone to know she gets a little bit stronger and more agile every day.

On Monday, math teacher Nikki Monaco sat in a wheeled classroom chair and raced Mackenzie down the hall. Mackenzie won.

On Wednesday, Mackenzie did a “stand-pivot transfer” – meaning that instead of sliding from the wheelchair into the classroom chair using her arms, she stood up, put a small amount of weight on her feet, turned and sat down into the seat.

She was not strong enough to do the maneuver a week prior, when she visited Akimel with the hospital staff.

And throughout the week, students who approached her had fewer questions about what had happened and more about the gear she uses to get around.

The black woven gloves she uses to protect her hands while wheeling the chair are of particular interest – they look like the kind of gloves weight lifters and mountain bikers use.

“This isn’t one of those pity stories,” teacher Meredith Smith said. “It’s more of a life lesson for all of us.”

Despite paralysis, Trojan Jack Jablonski is making a name in hockey,...