Living with a spinal cord injury for 50 years and counting! 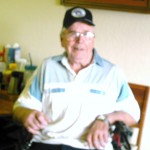 I am a 50 year SCI ‘spinal cord injury’ survivor. I wrote this hoping it might encourage someone or help them get diagnosed.

Life is pretty much what we make of it, change is constant in a body and this world, but we can cope with those changes.

Stuff happens, we must cope with what comes our way. We just need a combination of faith, good doctors and medical technology, hard work and some luck.

In June of 1964 I was twenty three years old, almost two years out of the US Air Force and running over with youthful energy.

I was a truck driver, working on highway construction. We had just moved to a new job site near Sisseton South Dakota and I was driving back in my car to be at work the next morning. I fell asleep at the wheel, the car left the road and hit the approach to a farmers field. That heavy old Pontiac went through the air a long distance and ended up in a cornfield. I was wedged under the bent steering wheel. I could see headlights go past off to my left, behind a little hill.

I realized getting out of the car was the only way to find help. I’m pretty sure God doesn’t play let’s make a deal but I was praying loudly for help, making promises that couldn’t be kept, stuff like that.

The front fenders of the car had been pushed back keeping the front doors from opening, couldn’t open either door more than a couple inches. I got out from under the steering wheel and crawled over the seat to get out of a rear door. My right leg wasn’t working so thought it was broken. It was very hard getting over that seat. I got out and found myself laying in the mud. It was raining hard, I pulled myself toward the road by grabbing onto cornstalks and pushing with my good leg. It was the middle of the night and there were few cars and they went by without seeing me. I got right up on the edge of the road and waved my handkerchief and finally a car stopped The woman in the car was a nurse, she kept me warm and sent her husband for help.

I woke up in the Sisseton Hospital and saw a doctor holding an x-ray of my back up to the light. I thought, how dumb, it’s my leg, not my back! Then I realized finally what happened, must have gone into some type of shock.

I spent the next three days there on my back with the bed cranked up in the middle. The pain was very, very bad. I imagine that was a type of prehistoric traction to put the T-12 and L-1 vertebrae’s back in place.

I was then moved to the Sioux Valley Hospital in Sioux Falls, South Dakota where I spent three months on a Stryker frame, were they could turn me periodically. I drove the Stryker frame to physical therapy, I used to go there by myself with two canes in my hands like ski poles pushing it down the halls. The people in PT were great, they got my right leg working again. The doctor did a spinal fusion in September and I walked out of there in a body cast, wore it for six months. I recuperated at a loving aunt and uncles house getting my strength back.

In 1965 I worked selling vacuum cleaners, insurance, day labor, carwash, apprentice press operator and a few other jobs. I finally went back to truck driving on construction, and then hauling meat over the road from Sioux Falls, SD to the West Coast in 1968. Driving in a sleeper rig with bladder and bowel troubles got to be quite a challenge, that truck smelled like a pine forest full of poop. I had a very understanding co-driver. Some weeks we unloaded 40,000 pounds of produce alone. My balance was bad. A trooper tried to take me in once for drunk driving after he watched me walk by the truck, couldn’t pass his sobriety test.

I got married in 1970, instantly had a wife, four daughters and a grandson. I also considered the Alaska pipeline job about that time.. I started driving a tanker truck in Tucson Arizona, easy stuff, unloaded itself. When driving with my arm out the window the air hitting my arm would sting, my left hand was losing sensation and couldn’t tell hot and cold apart. By 1985 the numbness had taken over all my left side from my waist to the top of my head and I was biting my tongue when I ate. In April of 1985 a young resident Dr. at the Sioux Falls VA Hospital was the first to diagnose my Syringomyelia. It has been learned that a disorder named Syringomyelia can follow a spinal injury. (only about 4% develop syringomyelia) A spinal shunt was put into my spinal cord at T-3 about a week later at the Minneapolis VAMC. The numbness in my tongue went away but everything else stayed pretty much the same. In October 1985 my left shoulder joint disintegrated (Charcot Joint). A new joint was mentioned but I was told it may not heal after being numb so long, still get some use out of that arm, hurts a lot. I finally quit driving, my walking was getting worse and I had the brace on my right leg. I’ve been lucky bowel or bladder trouble hasn’t gotten me, that is what usually happens, hardest thing to cope with.

In 2000 a disk and half of a vertebrate was taken out of my cervical/thoracic region of the spine for stenosis surgery. The vertebrate was put back with bone dowls and a plate with six screws was put in to hold my head on. I’ve had two low-sodium episodes since then, they were pretty bad. I thought for sure I was at the end of life’s check out lane. We sold our forty three year collection of stuff and moved into a small apartment.

I had a new thoracic shunt put in last October, 2014. Anxiously waiting to see what changes take place. I can walk with a walker, balance is bad. Need some help showering and getting dressed. I try to exercise every day with stretch bands. I’m very thankful for my 50 year SCI survival. I will be 75 if I make it to December 1, 2015. I’ve always tried to stay busy, it is now hard to do. My wife and I are each other’s caregivers. Memories from four daughters and their families, boating, hunting, fishing, gardening and our church family all help in these ‘Great Golden Years.’ The gold is right there in the specimen bottle.

Nurses’ role in both prevention and treatment of cervical and lumbar...

HOPE FOR THE FUTURE