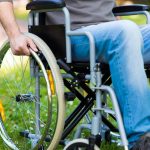 Did you know that September is National Spinal Cord Injury (SCI) Awareness Month? Originally co-sponsored by Marco Rubio and Bill Nelson, the bill for this awareness month was created to recognize the prevalence of spinal cord injuries in the country as well as highlight the achievements of those who are living with a spinal cord injury are accomplishing.

According to the Paralyzed Veterans of America, a person becomes paralyzed every 48 seconds in the United States. Here are several other statistics of note about spinal cord injuries, presented by the United Spinal Association:

The effects of a spinal cord injury can be life-altering, but it is important to know that individuals can often overcome the challenges of their condition and go on to live a normal life and achieve great things.

180 Medical’s founder, Todd Brown, is one of those people. Todd was involved in a motocross accident in 1994 that left him paralyzed from the chest down. Since that time, he has had to deal with the daily challenges that anyone with a SCI might encounter. He started 180 Medical because of his own experiences, including suffering from urinary tract infections from having to reuse his intermittent catheters.

After learning about closed system catheter kits from some of his friends in the adaptive cycle racing community, he saw great improvements in his health and his day-to-day life. With the right catheters for his needs, he was better able to manage his condition and felt his life had been turned around. Todd wanted to help others in his situation, and as a result, he started his company. Today, 180 Medical is a leading supplier of urinary catheter supplies.

What Can You Do to Help?

Chances are that many of us know someone who has suffered from a spinal cord injury. The goal of SCI Awareness Month is to educate the general public on its prevalence, ways we can prevent these events from occurring, and how to best provide treatment and support for those living with a spinal cord injury.

There are a number of ways you can help the cause and spread awareness: