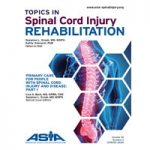 Spinal cord injury (SCI) disrupts the crucial “crosstalk” between the spinal autonomic nervous system and supraspinal control centers. Therefore, SCI may result not only in motor paralysis but also in potentially life-threatening impairments of many autonomic functions including, but not limited to, blood pressure regulation. Despite the detrimental consequences of autonomic dysregulation, management and recovery of autonomic functions after SCI is greatly underexplored. Although impaired autonomic function may impact several organ systems, this overview will focus primarily on disruptions of cardiovascular and thermoregulation and will offer suggestions for management of these secondary effects of SCI.

A 45-year-old man with chronic C5 motor complete spinal cord injury (SCI) presents to the emergency department with complaints of excruciating headache and profuse sweating of his face and neck. During his evaluation, he is in distress and extremely anxious. His arterial blood pressure is 220/105 mm Hg with a heart rate of 50 beats per minute. His caregiver reports that she had suspected autonomic dysreflexia (AD) and implemented initial management steps as recommended by the patient’s physiatrist. While still at home, she had transferred him into the seated position, loosened all possible constrictive devices (eg, belt and shoes), checked his Foley catheter to confirm that urine was passing, and made sure he’d had an adequate bowel movement that morning. After having 2 inches of nitroglycerin paste applied to his upper chest, the patient’s arterial blood pressure had remained elevated, and he had continued to be in severe distress. The decision had been made to seek help at the emergency department.

Paralysis and mobility disabilities are the most visible consequences of SCI. However, SCI may also result in less obvious but equally impactful secondary effects. Injury to the fragile neuronal structures in the spinal cord may results not only in motor dysfunction but also in disruption of the autonomic nervous system (ANS).1 Whereas an SCI itself is generally limited to several cord segments, its resulting neuronal dysfunction may affect a number of organ systems below the level of injury, most critically cardiovascular control and temperature regulation.

Sympathetic and parasympathetic components of the ANS constantly activate and interact with one another to maintain homeostasis of blood pressure, heart rate, and body temperature.2 The sympathetic nervous system is responsible for the fast physiological changes in the human body (eg, fight-or-flight responses), whereas the parasympathetic nervous system is predominantly a slower system, acting while the body is at rest (eg, “rest and digest” responses). SCI results in disruption of the descending spinal autonomic pathways, causing an imbalance within the ANS.2 Vagal (parasympathetic) pathways exit supraspinally, so they are generally intact in individuals with SCI. However, sympathetic preganglionic neurons are located within the thoraco-lumbar spinal cord (within T1-L2 spinal segments), so sympathetic spinal pathways may easily be disrupted by higher level injuries. SCI results in disruption of the descending spinal autonomic pathways.1 Conversely, vagal parasympathetic pathways, which exit supraspinally, are generally intact in individuals with SCI. Depending on the level of injury, individuals with tetraplegia versus those with paraplegia will have very different presentation of cardiovascular dysfunctions due to the amount of intact spinal sympathetic circuits above the level of injury.1 For example, in individuals with injury below the 6th thoracic segment, both sympathetic and parasympathetic inputs remain intact, and cardiovascular dysfunction is far less pronounced.2

AD is a potentially life-threatening emergency that can occur in individuals with SCI at the level of T6 and above but that has been reported in patients with SCI as low as T8–T12.3–5 AD is a medical emergency defined as a sudden significant increase in both systolic and diastolic blood pressure that may present with either bradycardia or tachycardia.1,6,7 It can be caused by any noxious or non-noxious stimuli below the level of injury. Up to 80% of episodes of AD are caused by a full bladder or by bowel distension or irritation8,9; however many other conditions may precipitate episodes, including a pressure injury or other skin issue, tight clothing or foot wear, an ingrown toenail, a kidney stone or urinary tract infection, hemorrhoids, an occult bone fracture, or painful medical procedure.6 The cardinal finding of AD is an elevation in systolic blood pressure over baseline of at least 20 mm Hg,10 but episodes may also be accompanied by profound headache, profuse sweating above the level of injury, blurred vision, piloerection, and/or anxiety. Episodes of AD may also be less severe and present with sweating and piloerection alone or be otherwise asymptomatic.11,12

It is critically important that any clinician helping care for individuals with SCI be able to identify, evaluate, and treat AD; unrecognized and poorly managed episodes may have serious consequences including intracranial hemorrhage, retinal detachments, seizures, cardiac arrhythmias, and death.13,14 Once an episode of AD is confirmed, it is imperative to promptly identify and treat the triggering factor(s) aggressively while also treating the hypertension.

The Clinical Practice Guidelines for the Management of AD recommend initiating the following management protocol15:

Following administration of one of the agents for management of AD, continue to monitor blood pressure every 5 minutes until resolution of the episode. If the systolic blood pressure continues to be elevated, consider referral to the emergency department for further evaluation and management. Owing to the possibility of asymptomatic myocardial ischemia in patients with sustained AD, routine EKGs and troponin tests should be ordered on patients with SCI presenting with severe and difficult to control AD. If all attempts to manage episode of AD fail and an individual continues to have elevated systolic blood pressure above 150 mm Hg, consider referring this individual to the hospital for monitoring and initiation of pharmacological control of the blood pressure and investigation of other potential causes of AD.

Many people with high level SCI may have resting systolic blood pressures in the range of 80 to 100 mm Hg. If the individual is not experiencing any symptoms such as light-headedness, fatigue, blurry vision, or other related symptoms, these values need not be treated. However, up to 74% of individuals with cervical and high thoracic SCI experience a drop in blood pressure when assuming an upright position, and this phenomenon is known as orthostatic hypotension (OH).17 The Consensus Committee of the American Autonomic Society and the American Academy of Neurology define OH as a decrease in systolic blood pressure of 20 mm Hg or more or in diastolic blood pressure of 10 mm Hg or more upon the assumption of an upright posture.18 The symptoms of OH in individuals with SCI are similar to those in able-bodied individuals19 and include fatigue or weakness, light-headedness, dizziness, blurred vision, dyspnea, and restlessness.20,21 Emerging literature suggests that OH may be associated with cognitive dysfunction and that appropriately treating the condition may result in improved cognition.22,23

To prevent or manage OH in the SCI population, first consider nonpharmacologic treatments such as thromboembolic compression stockings, abdominal binders, increasing salt and water intake, and slow transitions from supine to seated position. Consider pharmacologic treatments when nonpharmacologic interventions prove to be ineffective. Most clinicians use vasoconstricting (eg, midodrine) and volume expanding (eg, Florinef) agents in combination or as a monotherapy to manage OH.16

Abnormal temperature control is a well-recognized phenomenon following SCI.24 It usually occurs immediately after the injury and is often a life-long complication.25 Several factors contribute to the temperature dysregulation seen following SCI, including a reduction of the sensory input to thermoregulatory centers and the loss of vasomotor and sudomotor sympathetic control below the level of injury.26,27 A high-level SCI leaves a large area of skin disconnected from the supraspinal sympathetic control, including the sweat glands and blood vessels that are crucial for thermoregulation.28 Consequently, in contrast to individuals with lower level SCI, those with cervical and higher thoracic injuries are predisposed to a greater degree of temperature dysregulation.

A variety of thermodysregulations have been described in individuals following SCI. Poikilothermia is a condition in which body temperature is dictated by environmental temperature. In a high ambient temperature or during exercise, individuals with SCI may develop hyperthermia, while exposure to cold temperatures may induce hypothermia.25,29,30 Fever without an infectious source occurring in the first several weeks to months after SCI (“quad fever”) has been reported in individuals with cervical and high thoracic SCI.24

In addition to poikilothermia, a variety of sweating dysfunctions may be observed following SCI. Excessive sweating (hyperhydrosis), absence of sweating (anhydrosis), or decrease in sweating (hypohydrosis) may contribute to temperature dysregulation; episodic hyperhidrosis, in particular, may be associated with other autonomic dysfunctions such as AD, OH, or posttraumatic syringomyelia.31–33 The most common pattern of sweating dysfunction following SCI is profuse sweating above and minimal or no sweating below the level of injury. If this leads to an abnormally or dangerously high core temperature, the management includes use of ice packs and cooling blankets.34

We initially reviewed the case of a 45-year-old gentleman who presents to the emergency department with severe hypertension consistent with AD. Despite the efforts of his caregiver who had initiated a home AD management protocol, his arterial blood pressure continued to be elevated. At the time of admission to the emergency department, it was noted that his arterial blood pressure was still elevated at 170/95 mm Hg; his physical examination was otherwise normal; an abdominal x-ray was unrevealing; and a urinalysis had red blood cells, protein, and minimal leucocytosis. Although, he received 25 mg of captopril, his blood pressure was persistently elevated. Urine cultures eventually grew Pseudomonas aeruginosa, which likely caused a urinary tract infection and triggered this episode of AD. After initial administration of intravenous antibiotics and eventual transition to oral antibiotics, his symptoms abated and he was discharged home.

Although SCI is associated with multiple autonomic dysfunctions, they remain poorly studied and may be challenging to manage. Given the high prevalence and potentially serious consequences of AD and OH, in particular, clinicians helping to care for individuals with SCI ought to be familiar with presentations and basic management strategies of autonomic dysfunctions. Documentation and early recognition of AD should be included as part of the standard neurological assessment and management of individuals with SCI. It is crucial that blood pressure be managed appropriately in these individuals and that hospitalization be considered in cases of uncontrolled AD.

Don’t dive into a life-changing injury: Use common sense to stay...