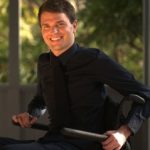 Newly published author Francesco Clark speaks to Tonic about his near-death spinal cord accident and how he’s defied the odds and taken back control of his life.

On the first night of June in 2002, Francesco Clark found himself drowning in a poorly-lit swimming pool in Long Island, after diving headfirst into the shallow end while going for a night swim. Forget the multitude of tales you’ve heard about the brain shutting down to protect itself during a traumatic event; Clark’s recollection of the moments leading up to, and during the accident is extremely and hauntingly vivid. “I remember the smells. I remember what I was wearing,” he says. “I remember everything.” Clark’s recently released memoir, (which was published on the eight year anniversary of the accident) Walking Papers, is his look back on his life as well as a look forward at what is to come.

A fashion assistant at Harper’s Bazaar, Clark’s future was immediately thrust into the unknown and instead of spending the summer in a Hamptons share house, he spent it in a hospital bed, unable to feel the majority of his body. It was then that he started plotting his next moves. “I felt like a fool and this horrible thing had just happened, but there was a part of me that had to show myself, and my family, that I was strong enough to deal with this.” And for Clark, his family’s constant support was (and continues to be) immeasurable — he moved back in to their Bronxville, N.Y. homeWal after the accident. In addition to unrelenting love, they made him acknowledge personal ownership of his injury. “There was a definite responsibility they made me take on. They challenged me and pushed me and it made me stronger,” he says. “Like: Yeah, this sucks, but what are you going to do now?

Following their lead, Clark ditched the daily soap opera routine, (“There is only so much Days Of Our Lives someone can watch before they go insane!”) and began writing weekly emails to his friends and former colleagues with personal updates and funny anecdotes. The distribution list grew and he quickly realized he had a captive (and growing) audience. When his friend Suzan suggested compiling the emails into a book, he reacted as any non-writer would, and told her that she was crazy. “When I think of an author, I think of someone who is very calm and composed and can write for hours,” he confesses. “I’m not a writer — at all.” But after realizing he’d like the chance to tell his story, Clark emailed a well-known literary agent with what he’d already written and asked for a meeting. “I pitched it to her in an email and just said, ‘Let’s see what happens,'” he laughs. A few weeks later, he had a book deal with Hyperion. 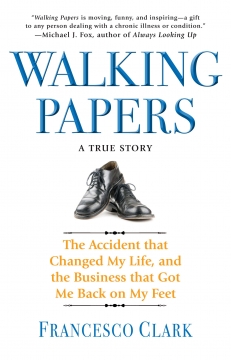 When recounting his injury and his road to recovery in print, Clark holds back very little. But he asserts that complete honesty was of utmost importance to him. Even if it required a conversation with his mother and his sister to help him reach that particular conclusion. “Writing this book was the most difficult thing I’ve ever done because I had to relive every single aspect of it, and then I had to think about what it felt like for my family,” he says. “I wanted to protect them and glaze over it all, like ‘They were fine, and my family is wonderful!’ he confesses with a laugh. “But they reminded me that the point of the book was to bring awareness to the injury. They wanted me to be graphic and blunt.” Moreover, Clark wanted to tell a story that he would’ve wanted to read eight years ago. “It’s not just for someone who has had an SCI (Spinal Cord Injury), it’s supposed to empower anyone,” Clark says proudly of Walking Papers. “You shouldn’t have to face near death to realize your life potential and go after your dreams.” 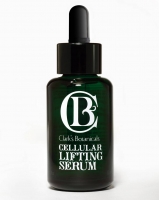 In addition to published author, Clark is also an entrepreneur. His skin care line, Clark’s Botanicals, is thriving (First Lady Michelle Obama is one of many celebrity fans who use and endorse his products) and the company is currently developing new multi-functional make-up products, which he says will make your skin look better after you take them off. (Sold!) The line is available through the company’s website and at Saks Fifth Avenue stores — his bestsellers are the Cellular Lifting Serum (at right) and the Ultra Rich Lip Balm (below) which are beloved by beauty editors and customers alike. Although he didn’t purposely embark on the beauty business path, it came as a natural progression after Clark and his father (a homeopathically-inclined doctor) worked to find a cure to his dermal ails (clogged pores and chronic breakouts) caused by his injury. Through word of mouth and a few free samples for friends, Clark quickly discovered a similarity to his email distribution list: a captive (and growing) audience. “I’m the first to admit that initially I was kind of unintelligent in terms of beauty,” he explains, “but that made me more curious to see what ingredients we’d want to use and how we formulate them.” His dedication and interest have certainly paid off: Clark’s Botanicals products have been featured in countless fashion publications and are sold across the country.

But what Clark chooses to focus on is maintaining a harmonious balance. “It is very important to me to connect the dots between every aspect of my life, which is beauty, my injury and The Christopher & Dana Reeve Foundation (for which Francesco is an ambassador and where a percentage of the proceeds from Clark’s Botanicals is donated),” he explains. “I can show that a plant stem-cell can actually be beneficial to your skin in a way that nothing else can, because it brings that level of awareness to a completely different demographic.”

Clark’s commitment to physical therapy (he does four to five hours a day) and interest in trials, cutting-edge research and alternative medicine is extraordinary. He traveled to Beijing for stem-cell surgery and currently is working with both MIT and Cornell on TMS research, where the brain is stimulated in order to activate nerves and spinal cord growth. Clark jokingly refers to the process as “brain shocking,” a term his doctors aren’t exactly fond of. “They hate when I call it that,” he laughs. “But it feels like a shock!” His progress is astounding; every couple of months, Clark sees more progress in his body. Within the past year, he’s developed movement in his wrists and in both triceps and is able to straighten his arm. “I started to feel my feet three weeks ago!” he says excitedly. “And only eight years ago, I was told I’d never move my arms or talk, or breathe on my own, or feel my feet. Are you kidding me?” Clark insists that had he listened to his initial prognoses, he would never be where he is today. He credits this unwillingness to conform to genetics: his mother’s. “There’s a part of me that is very Northern Italian, like her,” he says proudly. “And when someone says, ‘This is what you’re going to do,’ I’m like: ‘No.’ And then I’ll figure out how to do it my own way.”