‘It’s never been a sad day’ 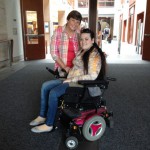 Ten years after a car accident left her quadriplegic, Katie Charboneau is celebrating what she jokingly calls “Happy Broke My Neck Day.”

This may be seem morbid, Charboneau said, but being quadriplegic hasn’t held her back, especially from being happy.

“It’s never been a sad day,” Charboneau said, “because I have such a strong community support and family support.”

When Charboneau was 19, a car in which she was a passenger caught loose gravel on County Road 2. After the car slammed through the guardrails, Charboneau was ejected through the glass. She broke her C5 vertebra, left collarbone, all of the ribs on her left side, and had a collapsed lung and a head injury.

She spent the next six months at Kingston General Hospital and St. Mary’s of the Lake Hospital.

Back then, she was ready to go to Carleton University with a scholarship. But after the accident in June, Charboneau was forced to forfeit her scholarship and acceptance, as Carleton refused to defer her admission.

While Charboneau was still recovering at St. Mary’s, she applied to Queen’s University, and began her undergraduate in 2006, a little over a year after the accident.

Today, Charboneau has extensive paralysis from the neck down, but has retained some mobility in her arms.

To mark her accident’s 10-year anniversary, and everything she’s accomplished since, Charboneau is having a public celebration in Gananoque where she originally hails from.

“It’s tragic when people do pass away and you have their celebration of life,” she said, “but I find a lot of people don’t celebrate their lives enough when they’re alive.”

The Gananoque community played a critical role in Charboneau’s recovery. After the accident, the community banded together to fundraise for her care and medical expenses, and the adaptive technology she needed.

But the event isn’t simply a celebration of life or to thank the community for support.

It will also raise funds for one of Charboneau’s caregivers who is seven months pregnant and recently lost her fiance in a tragic accident. The celebration, this Saturday at the Royal Canadian Legion in Gananoque, will have a $5 cover charge and will accept donations at the door to raise money for baby expenses. Music, dancing and karaoke begin at 7 p.m.

“She never thought about her disability or how hard it was,” Charboneau’s mother, Wendy, said. “She was always thinking about how (she) can make things better for everybody else.”

When Charboneau started at Queen’s, instead of participating in Frosh Week, she held a fundraiser for two patients at St. Mary’s who were also quadriplegic. Through a “run, walk, wheel” event, $10,000 was raised.

Charboneau was the first quadriplegic to live on Queen’s campus alone. With her move on campus, many of Queen’s accessibility flaws came to light.

Before her first year, she visited Queen’s for a tour. To get to the campus tour office downstairs, she needed to take an elevator. Going down was fine, but there was no coming up in the elevator, due to the weight of her power wheelchair, which didn’t exceed the maximum.

By the time Katie was back upstairs, there was only enough time to visit one place on campus.

She ran into other issues in her residence, Leggett Hall, which was only three years old at the time. When opened, the residence’s front door would shut Charboneau in the corner, and she wasn’t able to open her room’s door by herself.

Her room was meant to be wheelchair accessible, but it had carpeting and only two electrical outlets. Carpet isn’t wheelchair-friendly, and Charboneau required more outlets because she relies on electronic adaptive technology.

But Charboneau said any accessibility problems brought to the university’s attention were quickly solved.

“What they lack in accessibility, they make up for in accommodations,” she said.

While at Queen’s, Charboneau was the co-chair of Accessibility Queen’s for nearly five years, a student government-run group committed to enhancing student accessibility.

“It was important to me to try and make a difference with (accessibility on campus),” she said.

From when she started at Queen’s to when she graduated on the Dean’s List in 2013, she said there were many improvements made at the university — most likely because of the Accessibility for Ontarians with Disabilities Act. The act was passed in 2005 and mandates that all Ontario universities achieve accessibility by 2025.

“Accessibility has become a more universal issue,” Charboneau said. “Back in 2005, I was really the only student on campus in a wheelchair that I had seen.”

Many people don’t think about accessibility because it isn’t an obstacle for them, she said. As a result, many events are unintentionally made inaccessible.

Since her accident, Charboneau has travelled frequently, including visiting orphanages in Cuba and an elephant sanctuary in South Africa.

Now, Charboneau has a home in uptown Kingston and works at her “dream job” as the administrative manager at All In, a new organization that caters to individuals with mobility impairments.

At All In, Charboneau has various responsibilities, including offering peer-support services.

“If something that I went through helps even one person, then it makes it all worthwhile,” she said.

Meet the woman behind charity fighting to find a cure for...