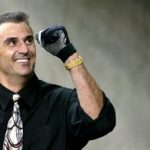 Eddie Murray planted a big kiss on the side of Mike Utley’s face Monday.

From his wheelchair, Utley fought Murray off before he could deliver a second.

“I know he hates that,” Murray said, laughing. “But I love the guy.”

Murray, 53, one of the NFL’s most successful kickers ever, is still amazed, he says, with Utley’s courage and commitment. They were Lions teammates when Utley, an offensive guard, was paralyzed from the waist down in a game against the Los Angeles Rams at the Silverdome on Nov. 17, 1991.

More than 18 years later, Murray and Utley are still best friends and keep in touch. Murray participated Monday in the first annual Mike Utley Golf Outing at the Wyndgate Country Club in Rochester Hills, with funds going to the Mike Utley Center for Human Performance at Detroit’s Rehabilitation Institute of Michigan. More than 120 golfers signed up.

Over the years, the Mike Utley Foundation, founded in 1992, has provided financial support for research and rehabilitation of spinal cord injuries. Through hard work, Utley has been able to regain full use of his shoulders, arms and hands and is committed to finding a cure for paralysis.

“Mike is amazing,” said Murray. “He doesn’t hesitate to help anyone he can. That was the way Mike was before his injury, and he’s probably done more since than any able-bodied person. Mike is living proof that you can have a life after a catastrophic injury — that it’s not the end of the world.”

No. 60 — the man who gave the thumbs-up sign to the crowd as he was wheeled from the field — doesn’t dwell on that fateful day. He’s still larger than life and more positive than most.

“I’m living every day the game they call life,” said Utley, who lifts weights, scuba dives, skydives and drives a blue and black Ford Lariat F350 Super Duty pick-up, which was prepped by Roush Performance Vehicles. “You got to earn it, and I have.”

Utley, who lives in Washington state, gets up at 5 every morning. He showers, stretches with the help of a standing frame, eats breakfast and pumps iron. He then works on his foundation projects, which includes charity events like Monday’s and at least two speaking engagements a week.

Utley, 44, says he doesn’t iron out wrinkles that come along in life — “I just pound them out,” he says with a laugh. “That’s the way I played.”

Utley’s mother, Irene, and father, Frank, flew from Washington for Utley’s golf scramble. Irene says Mike has never “let a bump in the road” slow him down.

“He’s been more intense, more focused the last 18 years than ever,” said Irene. “When he was a child, he’d tell us, ‘Me own self,’ meaning he’d want us to let him do things himself without our help. He’s never complained once about his life.”

Utley says he has a lot of work to do before he’s done.

“One day you’ll meet your maker,” he said. “You won’t get a second chance. You’d better be prepared — you’d better make sure you finished the job before you stand in front of Him.”

For more on the Mike Utley Foundation, visit www.mikeutley.org.

No excuses: former LP resident focuses on capabilities, not disabilities