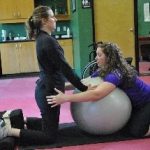 Backstory: Schindler, a lifelong athlete, suffered a spinal cord injury in January while snowboarding. Her injury is at T9, which means she has full use of her upper body. She grew up playing team sports, swimming, running, a little of everything. “I’m very active,” she says, “so it’s not the lifestyle for me, to be stuck in a wheelchair. All I can do is try, and I’m always trying.”

Workout: Schindler didn’t sit around for long. Two months after her accident she began working out at ADAPT in Beaverton. Twice a week for two hours she participates in ADAPT’s advanced program for people with brain and spinal cord injuries. Family members help her get back and forth to the gym; eventually she’ll start driving again.

At this point her work at ADAPT involves a lot of trying to mentally move her legs; to get her brain to reconnect. She practices weight-bearing: standing with her knees braced against something so she doesn’t fall down. She gets down on the floor and practices rolling over. She works on supporting herself while kneeling and balancing while down on all fours. “It sounds like it should be easy,” she says, “but you’re like a child trying to relearn everything. Core strength plays a big role.”

Feedback: “I didn’t really have time to forget how it feels to move and walk. I don’t know if I’ll walk again but it feels good to go to ADAPT and be working with someone.” Schindler says she’s mentally tired after her workout and frequently goes home and takes a nap. She doesn’t really get physically tired or work up a sweat yet. Right now it’s all about focusing on bringing connections back to life.

Nutrition: Schindler was already health conscious and her diet hasn’t changed, though she did cut down on coffee. She isn’t a picky eater, but she steers clear of fast food. Breakfast is usually yogurt and a banana, sometimes cereal as well. Lunch is often a sandwich, and she says she’s a big meat eater. She doesn’t like taking vitamins, but her vitamin D levels tested low so she just began taking that, plus B12, folate, calcium and a prenatal vitamin.