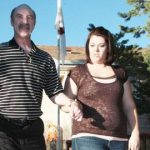 After spinal cord injury, Mark Rexus was told by doctors that he wouldn’t

After suffering a spinal cord injury in a work-related accident, doctors told Mark Rexus that he would never walk again.

“Only one doctor believed that I’d walk again,” he says after completing a walk from his front door to the end of his driveway, holding his 23-year-old daughter Sam’s arm on his left and using a cane for assistance in his right hand. “And, my therapists (at the Regional West RehabCenter). They have really helped push me.”

Rexus suffered his injury after falling off a forklift in 2006. Rexus said he only remembers looking behind himself as he backed up the forklift. He apparently blacked out, though the cause has never been determined. He crashed into an 8-foot-tall chain link fence, being thrown from the forklift he was driving. A co-worker discovered the accident.

He recalls waking in the emergency room a couple of hours later.

“God instills that in us to take away that pain away, so that we don’t feel that,” he said. “There is no way that we could handle that.”

He had suffered a compacting injury, as vertebrae in his neck were crushed and caused damage to his spinal cord. After the accident, he had to wait four to six weeks for swelling to get down before having surgery and confined to a hospital bed.

“Picture lying in bed, and you can’t move your toes, your fingers, your arms, nothing,” he said. His hands were put in splints to keep the muscles from tightening. He had his surgery, having three vertebrae fused together, and was allowed to go home two months after the accident. A plate and three screws remain in his neck.

“We were blessed because the doctor that performed the surgery happened to be in Scottsbluff when I suffered my accident,” Rexus said, explaining that the Colorado physician rotated two weeks at Regional West and two weeks at a Colorado hospital.

As a result of the injury, Rexus explained, his body’s muscle tissue has weakened.

He needs to continue to work every day to strengthen that tissue. He struggles to do tasks that he says all of us take for granted, such as walking around the house, mowing the lawn and going to work.

He has been in therapy for the last four years. Over the years, he has transitioned from a wheelchair, to walking with a walker, crutches and now with a cane. It took him nearly three years before he could walk on the treadmill in his therapist’s office.

“It’s been the longest four years of my life,” he said, something he said he often tells his wife, Jody, his daughter Sam, his 18-year-old daughter Whitne. “You can get it back, but it takes a long time. I went from bench pressing 260 pounds one day to being barely able to bench press 80 pounds two years later.”

He praises his therapist, Charlene Bevins, and those at Regional West Rehab Center for pushing him.

“Therapy people have to be special people,” he said.

Though describing himself as a stubborn person, Rexus admits there are discouraging times. He praises his therapists, his family and God for his accomplishments as he takes a new stride each day.

“You don’t know how many times I wanted to just sit down … you have to pick yourself up and keep going. Don’t take anything for granted.

Persistence paid off for paralyzed dad