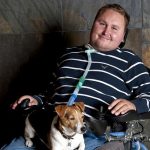 Shot the breeze with Matt Hampson the other day. We talked rugby, films, football, music, books — precisely the things you would expect when bantering with an archetypal 26-year-old. We discussed Martin Johnson, his hero, debated the technique and tactics of scrummaging and pondered England’s hopes at next year’s World Cup.

The whole thing was jolly fun and rather fascinating, despite a five-hour journey through sleet and snow to get to his lovely converted barn in Rutland, near Leicester. By the end of an hour I had almost, but not quite, forgotten that Hampson is not really an archetypal twentysomething at all.

Hampson is paralysed from the neck down. He is alive only because a tube extending through an aperture in his neck pumps oxygen into his body, every minute of every day. He requires 24-hour-a-day care from a team of ten nurses and the eternal support of a devoted family.

His story is familiar in rugby circles, but remains shocking.

In March 2005 Hampson was preparing to win his fifth England Under-21 cap and was practising with team-mates for a match against Scotland.

A tight-head forward, Hampson enjoyed the intensity of the scrum; it was his favourite aspect of the sport he adored. He heard the call to engage, pushed forward, pushed with all his might. But the scrum collapsed and he was engulfed by blackness.

Hampson started his rehabilitation for a dislocated neck and trapped spinal cord at Stoke Mandeville Hospital and, although the first months were appallingly difficult as he came to terms with his injuries, he eventually turned the corner.

Today he has a remarkably diverse life. He raises funds for spinal care, coaches rugby to youngsters at a local school, writes columns for the Leicester Mercury and is setting up a new charity. His life is a triumph of improvisation. He works on his computer via a beam attached to his forehead that he can direct on to cursors by moving his head. He makes telephone calls with the assistance of one of his nurses, who dials the number and places the device on speakerphone. He operates his wheelchair with controls attached to his chin.

But, amid everything, rugby remains his passion. “A lot of people find it ironic that I get so much pleasure from watching and coaching rugby when my injury was caused by rugby,” he said. “But I don’t see it like that. It is not the fault of the sport that I am injured. Besides, it is a destructive thing to hold a grudge, whether against a sport or against another person.

“My attitude is simple. You get one life and you have to make the most of it. I really enjoyed playing rugby before the accident and I really liked watching it. Nothing has really changed. I still like watching it and I love coaching it, particularly the scrum. You might find that weird, but why turn your back on something you really like?”

I was struck by his equanimity and wondered if there are times when living with a disability wears him down.

“Sure, there are dark days,” he said. “But we all have dark days from time to time. Feeling low or despondent is not exclusive to people who are not able-bodied, but it can hit anyone from pop stars to famous artists. I think the key is to focus on the positives, to recognise the things that make life worth living.

“When I was able-bodied, I would look at people in a wheelchair and see through them. They did not register as real people. I looked at the chair for a couple of moments, felt thankful I did not have to live in one and then got on with whatever I was doing. Perhaps I would still be like that had I not had the accident, who knows.

“But today I see people for who they are. I look past the wheelchair to the human being within.

“I do that today with everyone I meet, whatever their circumstances. Whether it is someone with cerebral palsy or whatever. They are individuals with hopes and fears and dreams.

“In that sense, you could say that the accident has made me a better person, a more accepting person. The most rewarding thing I do is to offer hope to others with my example. I am not ill or diseased. I just have a problem with my spinal cord.”

Hampson talked eloquently about the importance of a particular kind of support in the weeks and months after paralysis and in particular of the help that came from the Spinal Injuries Association, one of the good causes chosen for this year’s Times Charity Appeal.

He was helped by its peer support service, volunteers who have suffered a spinal injury who help the newly paralysed and their families to prepare for the future. “There is little more important at that time of great distress than to know there are other people who have suffered the same misfortune, but have come through the other end,” Hampson said. “The Spinal Injuries Association is brilliant in that regard and I benefited hugely from the support and advice.”

To describe Hampson as inspirational is so pat it almost feels patronising, but it also happens to be true. He is an inspiration to thousands who are disabled and tens of thousands more who have faced misfortune.

But Hampson is far more than an inspiration. He is also fun. He is engaging. He is funny. He is humane. He is profound. In short, he is terrific company.

You see a person, not a tragedy; an individual rather than a victim. And that is, perhaps, the most inspirational thing of all.

• Donations to The Spinal Injuries Association made by Times readers during the appeal will be matched by Pannone, the specialist serious injury lawyers, City of London’s City Bridge Trust, which funds projects helping the people of London, and Active Assistance, the live-in care specialist.
By Matthew Syed