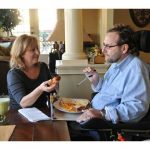 ‘Everything is falling in on us’

When Sharon Kelly bought into a raffle at Frames You-Nique in Gainesville, she had no idea that it would help her buy groceries.

On a whim, she spent the last few dollars she had to purchase a bag of popcorn with a prize hidden inside. Some bags had coupons hidden in them, but there was one with a grand prize.

“It was pretty amazing that I actually won $100,” Kelly said. “I never win anything.”

The windfall came at a time Kelly said she needed it most.

Kelly said she lost her job as manager of a storage facility last spring, about the same time her husband, Jerry Kelly, was released from the hospital. Jerry, who worked as an arborist, fell 40 feet from a tree on Sept. 12, 2008. Now a quadriplegic, he needs near around-the-clock care.

Their home in Gainesville, which they purchased just before Jerry was released, now is for sale. Sharon says her lack of income makes it impossible for them to keep the house.

After that, she spent 16 months commuting to the Liberty House, a transitional home in Marietta where Jerry lived as a full-time patient.

A drawn-out legal action to settle a workers’ compensation claim led to a cash settlement. But that money now is gone, used to purchased a specialized van and modify their Gainesville home to accommodate Jerry’s needs.

“Everything is falling in on us,” Sharon said. “And I can’t figure out for the love of me how to make this work. I sat down the other day and figured out what we owe and what we have in the bank, and I can’t make it work. I have to get an income in here. Or we’re going to be living in here without electricity.”

Recently, the Kellys were told the 24-hour nursing care Jerry needs will be reduced.

The news came as a big letdown for Sharon. She recently had earned a Certified Nursing Assistant license with the hopes of getting one of the paid eight-hour shifts as a nurse for her husband, but she found out it is not allowed.

“The day that I learned I got my CNA license, I was on top of the world,” Sharon said. “I hadn’t been that happy in forever. Walked in, Jerry (said) ‘We may not get full time nursing. They’re going to cut it back to 16 hours. It’s (considered) our private time.'”

“That’s what they call it, our ‘private time,'” Jerry said, the frustration evident in his voice.

“If I had had that eight-hour shift here, we would be fine. We wouldn’t have to move, we would be great,” Sharon said. “I just can’t find a job (now). They want CNAs with experience.”

“He has a nurse from 7 in the morning until 3 in the afternoon. From 3 until 7 at night, I take care of Jerry,” Sharon said.

“That’s our ‘private time,'” Jerry added with a grin.

Jerry must have his own room separate from Sharon’s to accommodate the medical equipment he needs. She worries about him not being monitored, “God forbid, what happens if Jerry has dysreflexia, any kind of complication?”

Dysreflexia can occur in patients with spinal cord injuries. A potentially life-threatening situation, it can cause a person’s blood pressure to rise to dangerous levels.

“The things that should have been given to Jerry through this whole thing was a rolling shower and a generator,” she said. “There’s not a generator here. If Jerry is on his lift and the power goes out, that’s where Jerry lives until the power comes back on.”

A life on a limb

Trees were Jerry’s life for more than 20 years.

“Storm damage is one thing I excelled at,” he said. “When you’re removing a tree, that’s when your real knowledge comes to play because the tree is so unpredictable at that point in time. And I would love that. It’s like a kid going into a candy store.”

“When a storm would come through here, you would see him, he would light up,” Sharon said. “The phone would ring and it would be his boss. ‘Well honey, I’ll see you in a couple of days.'”

“I got paid to play all day,” Jerry chimed in, “That’s what my job was. A lot of people can’t say that.”

Observing safety standards was important to him. “I was always considered one of the safest guys around. I was always the kind of guy that probably went the other way, almost over-safety conscious sometimes. I never wanted to end up like this.

“You know, it’s really humiliating when it’s like this, to feel totally useless in so many ways. Because you never expect your life to be like this. Never.”

“It was an accident,” Sharon reminds him.

“He doesn’t remember anything that happened but we all surmised that (his) hand saw cut his rope. And he blamed himself for a long time, but it was an accident. It was a total accident.”

The transition from the Liberty House to the home they’re in now has been stressful Sharon said.

“It’s a whole different way of getting to know my husband,” she said. “When he finally came home, it was like, ‘now what?'”

Sharon said she had hoped joint counseling sessions would be paid for as part of the healing process. “I literally got to the place where I said ‘we need to talk to someone together.’ This is something we’re both dealing with. I once had a husband that walked, and we went places and we did things together.”

During the impact, Jerry suffered frontal brain injuries. For a time, he could not communicate his needs as he wanted.

“He was stuttering a lot, he wouldn’t remember things,” Sharon said. “He remembered a lot of things about the past, but not the current. He doesn’t remember the accident. I told him that might be a godsend.”

“Parts of me would love to know it,” he said. “Because of how I went about it, that rope was cut so clean.”

“I still think it over once in a while. I would really love to know what I did differently than normal for that to happen. Because it’s like, I mean for crying out loud, I’ve done this stuff time after time, taking out the hand saw and whenever I did it … I don’t know,” he said.

The challenges Jerry has to face every day are not purely physical.

“I see Sharon doing stuff that I should be doing, you know, to help her out,” Jerry said. And that’s when your worthlessness comes to the forefront a little bit. That’s when it’s hard to get by.

“That’s a big part of it. Your mind can rule you and ruin you. It’s just a matter of how you go about it. You’ve got to have a good support system. As much stress as she’s been through, she’s been a terrific support system.”

Sharon is working on a project she hopes will be offered at the Shepherd Center.

“I am writing a book about how it feels to now be married to someone who is a quadriplegic. How it feels to go from being a wife to a caregiver. How you deal with someone and they are not the same. That’s been a huge release for me.”

“I think where your healing begins in any process,” Jerry said, “is you have faith. I don’t care what god you believe in, I mean I know who my God is. If you don’t have that, you need to find it. Because you can be angry at God, that’s OK, but it’s what you do after that’s what is important.

“I can honestly say through this whole process, I was never angry at God. It was never his fault. The God I know is a loving God. He’s not one that would say, ‘oh yeah, I kicked him out of the tree because I just feel like doing it for today.'”

Jerry has been the only person in the industry to have fallen as far from a tree and survived, Sharon said. When Jerry recovered enough to travel, a tree association in Rhode Island paid for him to attend a convention and speak about his experience.

Jerry said he attributes his life to a specialized hard hat he recommended his company buy. “These hard hats are like 75, 80 bucks a pop. We bought 16 of them,” he said. “Yeah, the good Lord had something to do with it. Also, the hard hat saved my noggin.”

When they visited his family in Chicago last year, Jerry said they attended a tree competition.

“There were some tree care owners I talked to in Rhode Island that were there. They came up to me in Chicago and they said ‘we will never forget your speech and how much it impacted me.’ That’s a pretty good feeling. A year later people are still coming up to you.”

“But he’s been reluctant,” Sharon said. “He knows he wants to write a book, he wants to do the speaking.”

Both Sharon and Jerry hope their life will one day right itself.

“I was a major walker, every day,” she said. “I couldn’t force myself to do it when he got injured. I felt guilty.

“I would try to get out there and walk, and as I would walk, I’d look up in the trees and I’d see him falling and I just started crying. I couldn’t stand being out in the fresh air. I couldn’t stand me being able to do normal things.”

“If I could find a job for handicapped people, I don’t know how you go about doing that,” Jerry said. “I’d do that in a heartbeat right now.”

“Like I say, legs cut out from underneath you. You’re out there in the cold just holding a bag of ice. And no one’s coming by to help you,” Jerry said. “The rights for a person who gets hurt are very limited.”

“Everybody said the reason Jerry’s still here is that there was a plan for Jerry, for us, and there is,” Sharon said.

“I wish I knew what it was,” Jerry countered.

“I’m not going to just give up and crawl in a corner, that’s not me. I haven’t figured out how to go about it, but I want to start talking, doing speeches and stuff like that. Life doesn’t end here. It doesn’t have to unless you choose it to be.”

BY EMILY PERRY For The Times