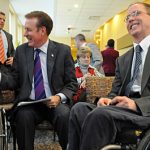 Tom Strang is proud of his guns.

Not just the long-barreled sort he fires in air gun competitions around the country. There are the others, the muscles he has been sculpting nearly every day in a makeshift gym in his Cecil home.

“You want to see that you’re getting better each year,” he says of his biceps.

More than 500 athletes are expected in Pittsburgh Aug. 1-6 for the National Veterans Wheelchair Games. The Olympics-style sports program is for military service veterans who use wheelchairs because of spinal cord injuries, amputations or certain neurological problems. The games, in their 31st year, include basketball, archery, table tennis and track and field.

On Monday, Highmark President and CEO Ken Melani donated $100,000 to support the games, which will be held at several venues, including the David L. Lawrence Convention Center, Downtown, and the University of Pittsburgh campus in Oakland.

Strang, 68, a Vietnam-era Navy submariner who grew up hunting and shooting targets for fun, has been a sure-fire medal threat each year he competes in the games.

He was paralyzed from the waist down in a fall from a balcony in 1990. After seven years of depression and recovery, Strang became involved in wheelchair sports and is the associate sports director for the Keystone Paralyzed Veterans of America.

His five-day-a-week workout regimen includes lifting dumbbells and reps with weight-resistant rubber bands. He hopes the routine will strengthen his shoulders and abdominal core, which are both key to having a steady aim in air gun competitions.

“Most people in wheelchairs don’t realize what they can do,” said Strang, who has competed in nearly every veterans wheelchair games since 1998, when they were last held in Pittsburgh. “I get inspired every time I go and see what other athletes do.”

Rory Cooper, 51, will be looking to add to his awards mantle this summer.

Cooper suffered a spinal cord injury in 1980 while serving in the Army in Germany. At last year’s games in Denver, the West Deer man won four gold medals in swimming events and a fifth gold in wheelchair slalom.

“This truly gives inspiration to people,” said Cooper, who heads Pitt’s Human Engineering Research Laboratory. “Anytime you can compete, you give hope to others.”

Admission will be free to the public.