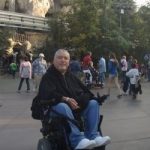 A quadriplegic Disneyland visitor is suing the parent company for failing to evacuate him from the broken “it’s a small world” ride, the lawsuit says, prompting dangerously high blood pressure.

Jose Martinez of San Pedro filed the lawsuit in U.S. District Court in Los Angeles on Monday, saying the Walt Disney Co. violated the Americans with Disabilities Act by failing to have adequate evacuation procedures for visitors with mobility disabilities.

The suit has been moved to the federal court in Santa Ana, said Shawna Parks, Martinez’s attorney and legal director with the Disability Rights Legal Center.

Suzi Brown, a Disneyland Resort spokeswoman, said company officials had yet to see the lawsuit.

“Disneyland Resort is accessible to guests with varying needs, including those with mobility disabilities. If it is necessary to evacuate an attraction, we have procedures in place for all guests,” Brown said in a statement.

During a Nov. 27, 2009 visit to the park, Martinez was left inside his wheelchair on a ride boat for about 40 minutes while other visitors were evacuated, according to the lawsuit. The rides boats stalled because of a computer glitch near the exit of the final tunnel in the ride, which repeatedly plays the catchy “it’s a small world” song.

“In my opinion, if you are going to put him on the ride, there needs to be a safe and effective way to get him off the ride,” Parks said.

While waiting for help, Martinez suffered from dysreflexia, a medical condition that can cause death if untreated, the suit states. For people with spinal-cord injuries, stress can prompt sudden high blood pressure that can lead to stroke or death, according to WebMd.

“It feels like an ice pick going through your temples,” Martinez said. The pain was exacerbated “especially when you couple that with the continuous, ‘small world’ music in the background.”

Martinez told employees that he needed to get off the ride immediately, but he wasn’t able to leave until the ride started up again and went to the dock exit, he said. A nurse met him there, took him across the park to a first-aid station and called paramedics. The nurse gave Martinez blood-pressure medicine, as well.

Inspectors from the Division of Occupational Safety and Health checked the ride Dec. 16, 2009, after getting a report that a visitor had suffered a panic attack on “it’s a small world,” according to state records. Theme parks are required to file state reports when visitors are injured on a ride. Inspectors found no safety problems with the ride.

The lawsuit does not seek a specific damage amount.

“We’re not just trying to sue because it’s available. To us, it’s to make the proper changes (at the park),” Martinez said.

See a video of Martinez on the Disneyland ride on CBS Los Angeles’ website.

Read about policies and attractions for visitors with disabilities on Disneyland’s website.

See this post in its original form, and read more on Around Disney.

Interabled Couples Criticize Dr. Phil for Saying You Can Be a...