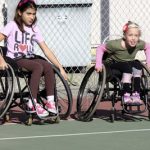 DOWNEY – The happy memories of a wonderful Christmas changed in an instant when four-year-old Katarina Milatovich and her family were involved in a horrific car accident on their way home from their holiday celebration.

Although her mom and brother were hurt, they soon recovered. But Katarina suffered an injury that would last a lifetime — a spinal cord injury that left her unable to walk.

“Imagine this happy, playful, wonderful girl who suddenly found herself in a wheelchair,” her mother Natasha says. “When she went to school she was different from the other kids. She felt like an outsider.”

The accident robbed Katarina of more than just her mobility. Much of her joy and self-confidence also evaporated in the weeks and months following the accident.

But Katarina was lucky, because Dr. Luis Montes, chief of Pediatrics at Rancho Los Amigos National Rehabilitation Center in Downey, told her and her mom about Rancho’s nationally renowned Wheelchair Sports program. Not only could Katarina participate, there was a special team called the Futures which was created specifically for young children just like her.

The Futures team is the fastest-growing part of the Wheelchair Sports program, with 20 kids now participating. The team is made up of children from ages 3-11 with various orthopedic disabilities. Although many of these kids have previously been told of all the things they cannot do, a key goal of the Futures program is to instill an understanding that most things can be achieved with hard work in the athletic arena…and in life.

Katarina first learned to wheel in a straight line, then how to go fast and how to be almost as nimble in her wheelchair as other kids who had no physical challenges.

“Besides the fact that it’s good for her body and that she’s learning technical skills to have better mobility, the real blessing from this program is the way that it has empowered her and rebuilt her self-confidence,” Natasha says.

Each Saturday, when the Futures team plays on the Rancho basketball or tennis courts, the team members are learning much more than just sports. The early goal is to develop a love for movement, cooperative games and activities. Academic achievement is also woven into every practice and meeting.

Soon these kids learn how to be a team, how to set goals and how to achieve their goals.

“It’s amazing to watch the camaraderie between these kids,” Natasha says. “Katarina loves to play with her friends, and now she has found out that she can often even beat the boys. She loves that!”

She is the only child in a wheelchair in her school. That used to be a major issue, but it isn’t anymore. “Wheelchair sports has given her a positive attitude that has carried over to all the other aspects of her life,” Natasha says. “It has given her something she can be good at, and taught her how she can take control of things in her life when before she felt like there was very little she could control.”

“I have my daughter back…the joyful, motivated, brave girl we knew before the accident,” Natasha says. “She loves to play, but now she has learned to love life.”

Katarina’s friend Katie Hull, who is almost 8, has battled Spina Bifida since birth. She is also a very special girl whose life opened up when she joined the Rancho Wheelchair Sports program.

“When she was born, the doctor came in and said, ‘it’s much worse than we thought…she will never walk,’ Katie’s mother Sarah says. “But even though she was mostly a happy child, being in a wheelchair was making it harder and harder for her to keep up with other kids the older she got.”

Katie excelled in school. She was a very fast learner and even won a spelling bee, but it was hard for her to literally be on a different physical level from her classmates. “At school, she always has to look up at her peers and they look down to talk to her. But in the Wheelchair Sports program, she can literally look at other kids at eye level, because they are all in wheelchairs.”

She feels a sense of accomplishment when she excels in the games and drills her coaches put her through. She has also discovered that she loves to go fast and be around the other kids.

“Now everyone at her school knows that she is an athlete who plays wheelchair sports, and that she is very special,” Sarah says.

Her coaches, Rick Tirambulo and Lisa Hilborn, regularly speak with her not just about athletics, but about her future, and the importance education can play in her life. The Ladies of Las Floristas, who fund the Wheelchair Sports Program, also provide scholarships to help Rancho’s student-athletes reach their academic goals. Katie has been inspired to dream about her educational future.

“She loves to look ahead, and since we’re a USC family, her goal is to attend USC,” Sarah says. “She knows it can happen, because the Wheelchair Sports program has many mentors who were once in her situation who have excelled in college. She wants to follow in their footsteps.”

In fact, Rancho Wheelchair Sports participants graduate from college with bachelors and masters degrees at a rate more than three times higher than their counterparts with disabling illnesses and injuries throughout the nation and equal to the rate of the able-bodied population.

“The balance between academics and athletics is really important, and we are thrilled that Katie, Katarina and all their teammates are learning about life as well as sports.

Katie and Katarina each look forward to the day they will transition from the Futures program to the competitive world of the Rancho Renegades Varsity Team, which finished second in the nation out of nearly 70 teams at the national tournament last year.

But for now, they show up at Rancho each Saturday, playing and motivating their Rancho Futures teammates. The smiles on their faces say that they are two friends having fun playing together, just like any other kids.

And thanks to their loving families and the Rancho Wheelchair Sports program, their futures are absolutely unlimited.