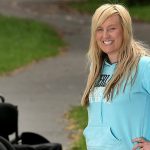 RHIANNON Tracey was told she would never walk again after breaking her neck and three vertebrae on a horror Bali trip.

But 18 months after inadvertently diving headfirst into a hotel pool, the quadriplegic has taken her first steps again.

Her incredible progress, however, has come at a massive cost for her Eltham family, who have spent more than $300,000 on physical therapy and specialised help from two trips to an American spinal rehabilitation centre.

Rhiannon’s family is now pleading for corporate support and government backing as they join about 30 other Victorian families to open a franchise of the US centre, Project Walk.

“Basically I was told there was no point in moving anything that wasn’t already moving,” Rhiannon said.

“Every time I had someone with me they were either massaging my hands or legs, but the nurses would say there’s no point in doing that.

“They should never say never, because that puts you in a really dark place.”

“In Victoria they get you independent in a wheelchair. That’s their focus, walking again was never discussed,” Ms Bradford said.

“I wanted them to do more for Rhiannon, but they didn’t want to. They couldn’t because they’re restricted with government funding.”

While in hospital in Melbourne, the pair spent a night searching the internet for alternatives and found Project Walk.

Ms Bradford said it worked by getting patients out of their wheelchairs and using physical activity to reactivate the central nervous system through an exercise and weight-bearing program.

“Not everyone is going to walk, we know that. But if you’ve got a chance to be able to get back your sensation of feeling, so you can feel a pressure sore before it gets infected and kills you, that’s going to save you going into the hospital system,” she said.

“The worst case scenario is that you only get stronger.”

Ms Bradford said they met many Australian spinal-cord patients while at the American centre and had seen the toll of moving overseas for treatment.

“This type of injury cuts you off from the world and our government is not helping this because they won’t look outside the square to what can help people,” she said.