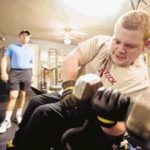 John Lee likes to brag about Paul Jones, one of his clients at the gym he operates in back of his home in East Memphis.

“Paul is the strongest bench presser I have,” Lee says of the 27-year-old former college student who routinely hoists and pumps 70-pound dumbbells, one in each hand, during their regular workouts.

Lots of young men can lift weights, but few are like Jones, who has been paralyzed below the chest and able to move only his arms since October 2008.

Jones views his meeting with Lee last spring as a lifesaver, helping him gain strength and fitness and providing a routine that is challenging and fulfilling. He looks forward to each of the strenuous workouts Lee puts him through four times a week.

“Sometimes I get a high like runners get,” Jones says.

That’s a lot better, he adds, than some of the lows he has experienced since his life changed forever on the night of Oct. 12, 2008.

That day, he attended a friend’s wedding. At the reception, he recalls, “I got blackout drunk,” and then set out to drive home.

He has no memory of what happened, but he was told that the Nissan Altima he was driving struck a telephone pole at Shady Grove and Yates. His spinal cord

A physician who operated on Jones after the accident told him he was the only patient he knew of with such a severe injury who lived through it.

What came next was six months of rehabilitation in Atlanta, “learning how to adjust to my new life.” He credits the staff at the Shepherd Center for helping him understand that, for people who undergo such traumatic events, “life isn’t over — it’s just different.”

It also helped, Jones says, to see many others at the center who were worse off than he was.

Despite the inspiration, Jones sometimes struggled “just to make it through the day.”

There’s also the realization that his act of driving drunk might have been much worse had the crash involved another person or persons.

“It’s a mistake I have to live with every day,” he says.

In April 2010, Jones’ younger brother, Ben, suggested that he drop in on Lee. Ben, who had done some weightlifting, met Lee at a fitness club. Conveniently, Lee’s home is not far from where Paul lives with two roommates.

Jones had gained weight and was feeling “pudgy.” He didn’t like the way his upper body looked, and since he has movement in arms, he hoped lifting would give him a more sculpted look. He was also hoping to gain enough strength to be more independent, perhaps moving from the motorized wheelchair he now uses to one he could move about using his arms.

The first challenge for Lee was figuring out how Jones could be positioned for lifting weights.

It was not practical to try to move Jones from the chair, so Lee improvised, putting a board wrapped in a yoga mat behind Jones’s back and tipping the chair back far enough to rest on a medicine ball filled with a heavy material and positioned against a bench.

In that position, Jones is parallel to the floor, secure and ready to go.

Lee has Jones warm up with some curls with a 20-pound weight before using the chair’s motor to move into lifting position.

On a night in late February, the workout was focused on the arms and chest. Lee picked up a 40-pound weight and handed it to Jones, who established a firm grip in his left hand. Lee handed him another 40-pounder for the right hand and the pumping started.

In a typical workout session, the lifting progresses from 40 pounds to 70 in 10-pound increments — then back down.

“A lot of people can’t do 70 pounds,” says Lee, who stands guard over Jones as the lifting progresses to make sure there are no accidents. He also provides motivation.

As Jones struggled with two 60-pound weights, clearly laboring, Lee was there with nonstop chatter. With the 60-pounders, Jones’s initial goal was 10 reps, but he shot past that to 15, then 20. Lee was not sure Jones was going to get to 25 reps, his usual standard, but when it became clear it was within reach, Lee shouted, “Drive! Drive! Drive!”

Jones made 25 with a gasp, tossing the heavy weights to the floor.

“How do you feel?” Lee barked.

Lee knows all about athletic highs. After playing defensive tackle for then-Memphis State in the ’70s — he graduated with a degree in physical education — Lee took up boxing and kickboxing. He also has a black belt in karate.

His record as a boxer was 15-0. As a kickboxer, he was 4-1. The only loss was in his last bout, against the formidable Anthony “Amp” Elmore. Lee knocked Elmore down during their fight in 1983, but had to quit because of a badly cut eyelid. He told Elmore later, “You did me a favor.”

At 56, Lee still sports the physique of an athlete. He has been a trainer for 28 years, helping people with fitness and motivation.

Ben Jones believes his brother has benefited significantly from the weight training and Lee’s tough approach.

“It has given him a lot more confidence,” says Ben, 26, “and it gives him something to look forward to.”

Lee is careful not to go beyond his client’s capabilities, but they are often right on the edge.

The workouts are varied to keep from working the same muscle group on consecutive workouts.

Jones reflects that when he first visited Lee, “I was looking to make some changes. I figured that if I didn’t get serious about making my health a priority, I wouldn’t be around much longer.”

Lee’s first impression of Jones was that he was “looking for something.” He could see a determination that was compelling. “You know,” he says, “a wounded animal will fight harder.”

Jones doesn’t know about that, but he does know one thing about his sessions — and his friendship — with Lee: “Every time I go there, I feel better when I leave.”

By Brent Manley Special to The Commercial Appeal

A year on from fall, life is looking up