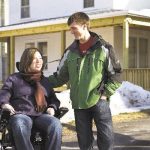 ‘You almost don’t even believe it when you see it. It’s amazing — the little recoveries that propel you forward’

AUSABLE FORKS — The night Michaela Bushey wiggled her toe, her mom, Angela, called everyone she could think of.

After all, was a “huge, thrilling” step in her daughter’s recovery.

Michaela, 20, of AuSable Forks was paralyzed when she hit her head while diving into a pool on July 4, 2010, and people from all over the area have been following her progress.

Angela said, “People always ask my sister down in Port Kent, ‘How’s she doing?’ They ask my husband. My youngest son is a teacher at school, and everybody wants to know.”

Michaela has recently regained trace movements in her fingers — and a wiggle in that one toe.

“You go from your body being silent, and then all of a sudden there is a connection between your brain and your toe,” Michaela said.

“You almost don’t even believe it when you see it. It’s amazing — the little recoveries that propel you forward.”

Michaela’s next step forward was to return to Ithaca College, another community that she said has been overwhelmingly supportive.

“As far as making accommodations for me to come back to school, they’re renovating a dorm room so that it’s accessible for me, so that I have everything I need,” Michaela said.

“They’re really moving mountains for me.”

Angela is joining Michaela in Ithaca, where she will need 24-hour care.

Michaela, a senior, had been pursuing a double major in vocal performance and music education. Because her left vocal cord was paralyzed in the accident and she has lost her abdominal breath support, she cannot sing to the capacity that she once did. She decided to drop her vocal performance major.

With 14 credits left to be completed in her music-education major, she will finish her degree in December.

Angela said her family is working to find new outlets for Michaela to express herself.

“For a girl who was so very talented and still is talented and is not able to voice that talent,” Angela said, “she’s looking for other ways to express it because of the paralysis.

“For someone who cannot move her hands and fingers but who played the piano fluently, that’s a dramatic change.”

Michaela has begun to consider alternatives to her music career, such as working as a translator.

“I’ve always been good with languages, so I thought that once I finish my degree, I might pursue something along that vein.

“It’s opened up a door because I thought about it before but never seriously considered pursuing it.”

She said her goal now is to achieve functional recovery so she can live independently and care for herself.

While the community has been wonderfully supportive in spirit and in fundraising, the Busheys have had to look elsewhere for the medical care she needs.

Shortly after the accident, Michaela was treated in Atlanta, and she just returned from spending two months in Baltimore.

“Unfortunately, in the North Country, there’s not anything that specializes with spinal-cord injuries,” she said.

“We’re looking; there are places in New Jersey and Boston, all over the place that we’re applying to, hoping that they will accept us and that insurance will cover it.”

There are a few tools for which they hope to secure insurance coverage, such as a functional electrical stimulation bike, which would allow her to exercise and would open new pathways of motion between her spinal cord and her brain. One model of the bike costs $15,000.

Therapy with these type of machines has already helped Michaela regain some of the movement that she had lost.

“She strives to work; she strives,” Angela said. “It’s nonstop, the road to recovery.”

Several North Country organizations held fundraisers to support the family when Michaela first sustained the injury, including people the Busheys didn’t even know.

For example, parishioners from the family’s church, the Independent Baptist Church in Keeseville, organized a work day to rebuild the front porch of their house so it could support the weight of a power wheelchair.

A local electrician, Daniel Fenton, installed lighting outside their house to make it safer for Michaela to enter and exit.

And even now, months after the accident, the care and attention keeps coming.

Michaela’s friends at the AuSable Valley Drama Club recognized her at their recent performance of “Bye, Bye, Birdie.”

And Angela stresses that these are just a few of the groups and individuals who reached out to the family in their time of need.

“In this community, people see a need and they respond to it,” Angela said.

After all the support the community has given, Michaela said all she can ask for now is prayer.

“Keep me in (your) thoughts and prayers because, you know, every day I’m just trying to get better. (I’m) trying to work toward recovery. That’s a really hard road.”

Despite the limitations in medical equipment, the Busheys are thankful that they live where they do.

“Home is here,” Michaela said. “In a small town, people watch you grow up. It’s kind of like a big family, everyone knows each other. When something catastrophic like this happens to someone, what do you do in a family? You do everything you can to make sure that your family is OK.”

Michaela is nervous but excited to return to Ithaca, where, she said, like here, she can maintain an active social life.

And then, so did her daughter.