Doctors with disability continue to practise thanks to technology, support and a positive attitude 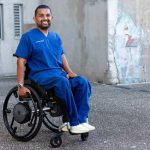 Doctor Steven Peterson was cycling to work in the autumn of 2018 when he was struck by a car and taken to the same emergency department where he was due to start work.

“The driver stopped and called the ambulance and probably would have saved my life by doing so,” he said.

“My colleagues were expecting me. They were aware that a trauma was coming.

“And they were wondering where I was because I may well have been involved in the managing of it.”

Dr Peterson was left a a quadriplegic by the accident in Orange, New South Wales, but assistive technology and modifications to his home and work environment have enabled him to continue practising.

“I did a lot of research to try to work out how I was going to make the quadriplegia and medicine work,” he said.

“After much trial and error, we were able to figure out what was best.”

He also conducts work in addiction and alcohol detox, teaches, and has recently been elected to a local government.

Dr Peterson is one of several medical professionals around Australia who have not let disability stop them from pursuing their careers.

In the Perth suburb of Greenwood, Western Australian physiotherapist Robert Vander Kraats returned to work two years ago after suffering a stroke during 2015.

He said his challenge was finding someone to help him overcome his physical limitations.

“And with physio you need both in the same room.”

They have developed a complementary partnership, combining their skills, knowledge and experience.

“Jeff is more than just my hands. We communicate and work really well together,” Mr Kraats said.

Prior to his stroke — which he had at the age of 30 — Mr Vander Kraats was working with elite athletes such as the AFL’s West Coast Eagles.

“The first initial response was, why did it happen to me?” he said.

“Just weeks before I was doing triathlons, so I was pretty fit and didn’t have any warning signs and then, hey, it happened to me.

“So at that point you can choose your attitude, you think, ‘What can you do with this?’.”

Mr Vander Kraats, who still undertakes regular treatment himself, said direct experience with disability had also informed his approach to his clients.

This included being able to relate to a patient’s medical experiences, and those involved in the National Disability Insurance Scheme.

“[Before] I could sympathise, but not empathise, and now I can because I fully know what’s involved,” Mr Vander Kraats said.

Dr Dinesh Palipana is a senior resident at Gold Coast University Hospital and advisor to the Disability Royal Commission, which was established in April 2019.

He has quadriplegia as a result of a motor vehicle accident that caused a cervical spinal cord injury halfway through medical school.

Dr Palipana is a founding member of Doctors With Disability Australia (DWDA), a national advocacy organisation working to remove barriers, bias and stigma in the medical profession for students, doctors and health professionals.

“Sometimes it’s just talking directly with the hospital or a school to support a student or talking to decision makers.

“[There] should be very little reason for the hospital to deny someone with a significant disability coming through, because there’s precedent.”

Dr Palipana said he believed it benefited everyone to help individuals to reach their potential.

“Australia is a country that, as a society, we have invested billions of dollars in enabling people.

“If someone wants to be a doctor so badly, why should we try to stop them?”

Ari Patison is a neurodiverse third-year medical student at the University of NSW.

She has set up a disability committee at her university to raise awareness and provide a safe environment for other students to find networks, support and advocacy.

“The support that they’ve given us has been a lot of just reassurance and communication … just validating the experiences and [confirming] that some of the things we have faced are wrong,” she said.

Dr Palipana said he was able to talk her through setting up the group.

“It was … connecting her with other groups and involving her with some of the big level changes that we’re trying to do,” he said.

For students and doctors returning to work, Dr Palipana said it was important to match their capabilities with career paths and opportunities.

“I’m not going to be performing neurosurgery, right?” he said.

“I don’t have finger function so it’s logistically challenging.

“But I see patients in the ED and I’ve been working there for six years now in Australia’s busiest ED.

“So there are so many places where you can fit into. Medicine is a big, big profession that’s so diverse.”

Dr Peterson added that COVID-19 had made technology-driven services like telehealth more acceptable.

“The telehealth service started before COVID but people are more used to it now,” he said.

“It is an actual consultation, and we can get up a video or [consult] over the phone.

“I can see the patient, or I can get a verbal instruction from the various nursing staff.”

For Dr Peterson, his mindset was a big element in his response to his changed circumstances.

“Both myself and the nation as a whole had invested much in making me a doctor.

“So that return on investment was still owed.

“It’s good to get an income and have an enjoyable, useful job, but I felt that if I could work, I should.”

Gymnasium is fit for people with disability