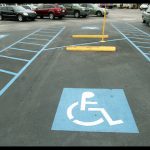 DAYTONA BEACH – When Charles “Jay” Ayres joined the Army, he had no idea that years later, his biggest fight would be for parking spaces to get in and out of his van.

Mr. Ayres is not the only driver with disabilities who deals with the lack of ‘handicapped parking’ spots. Recognizing this, the Volusia County Sheriff’s Office recently added 32 volunteers to help protect accessible parking spots for Mr. Ayres and other drivers with disabilities.

Accessible parking spots are abused in a number of ways, experts say, such as able-bodied drivers illegally using permitting placards, or simply parking in accessible spots without concern of enforcement.

“We know this is a problem; we know this is a concern,” said Gary Davidson, public information officer at the Sheriff’s Office. “It’s a troublesome issue for drivers with disabilities, and we hear complaints from time to time.”

Mr. Ayers said many people don’t seem to understand the importance of accessible parking, let alone access aisles, for drivers who use wheelchairs.

Mr. Ayers has a service-connected spinal-cord injury. He’s been a wheelchair user since 1982.

“You talk to people about it and they act like you’re completely inconveniencing them,” Mr. Ayers said. “They don’t get it.”

“The access aisle is a 5-foot-wide space on the left or right of the (accessible) parking spaces,” he said. “By state law, it has to be striped diagonally with white paint.”

The Marine Corps veteran explained that many drivers who can legally use accessible parking, but aren’t wheelchair users, don’t understand what access aisles are for and often park in them. While Florida law requires the spaces to be five feet wide, individual businesses sometimes make them wider. Mr. Ritter, who is a wheelchair user, said he’s had to sit in parking lots awaiting drivers to come back and move their vehicles, so he could deploy his van’s ramp.

“This has happened to me several times,” he said.

Julie Shaw, executive director of disAbility Solutions for Independent Living in Daytona Beach, said she knows of quadriplegics who have overheated while awaiting drivers to move their vehicle.

“Someone who’s quadriplegic can’t be sweating,” she said. “It can become a medical emergency.”

Many quadriplegics and paraplegics drive using hand controls for breaking and accelerating.

Mr. Ayers sometimes drives a specialized van with a deployable lift to help him get in and out. Other times he drives a car with his wheelchair collapsed. To get out of a car, Mr. Ayers will open his door, set down and open his wheelchair, and transfer to it. Some, but not all, paraplegics and quadriplegics can do this.

“You find it a lot in the Spruce Creek area,” said Mr. Ayers. “A lot of the people with expensive sports cars – they’ll park in the wider spots, because there’s less risk of getting their cars damaged.”

In addition to people illegally using or cluttering accessible parking spaces and access aisles, Mr. Ayers complained that getting permitting placards for parking in accessible spaces is too easy.

“I see this every day,” said Mr. Ayers. “I think a lot of the problem is doctors who give these things out like candy.”

Under state law, any doctor, chiropractor or nurse practitioner licensed in Florida can sign for a driver to get a permitting placard. Ms. Shaw said to prove the point, a Florida reporter got two accessible-parking permits for his cat.

“We continue to have a lot of people who acquire these permits inappropriately,” she said.

The Volusia County Sheriff’s Office volunteers are part of the Citizen Observer Program, which started in 1989. They’re authorized to write tickets to vehicles illegally parked in accessible spots, as well as fire lanes, in the Sheriff’s Office’s jurisdiction.

Ms. Shaw, who used to work for the Paralyzed Veterans Association of Florida, said enforcement is the only way to educate and encourage the public to understand and respect accessible parking and access aisles.

“We saw the abuse reduce when there was actual enforcement,” she said. “If you have an area where law enforcement doesn’t enforce the law, it sends a message that it’s OK.”

She added a warning for those who misuse placards to park in accessible spots.

By Patrick McCallister
For Hometown News

A cyclist’s uphill battle to get his life back