Spinal-cord injury hasn’t slowed him down 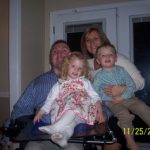 Jesse, 33, is a physician at Carolinas Rehabilitation and is also pursuing a master’s degree in public health at UNC Charlotte. Michelle, 36, is an occupational therapist in the Carolinas HealthCare System. They are parents to 3-year-old twins, Gracey and Saul.

What makes Jesse and Michelle inspiring and a “testament to the indomitable human spirit,” said friend Justin Falls, is that they are working, helping others and raising their twins in the wake of Jesse’s life-changing spinal cord injury.

Late one February evening in 2003, when he was in his third year of medical school at Wake Forest University, Jesse fell three stories from his and then-fiancée Michelle’s balcony. He was trying to help a neighbor.

The fall and resulting injury to Jesse’s spinal cord at the C5 level left his legs, wrists and hands paralyzed but his mind and will intact. A C5 spinal cord injury refers to an injury of the fifth cervical vertebrae in the neck and can result in complete or incomplete paralysis.

Jesse can move his shoulders and flex his biceps, which together help him maneuver his power wheelchair, hold his children and feed himself with adaptive equipment. He uses voice-activated equipment to use his computer and phone.

With his optimistic attitude, determination and the support of Michelle, family, friends and medical professionals, Jesse finished medical school on time in May 2004.

Jesse and Michelle married in 2004. He completed his residency at Carolinas Rehabilitation and his spinal cord injury fellowship at the University of Pittsburgh Medical Center. In March 2010, he returned to Carolinas Rehabilitation as a junior faculty member with a research fellowship. Jesse sees patients at Carolinas Medical Center 25 percent of the time and does research the other 75 percent.

The Liebermans are happy to be back in Charlotte near friends and family after a tough year in Pittsburgh. While completing his fellowship, Jesse had severe complications from his implanted baclofen pump, which is used to control spasms that can occur after spinal cord injuries. Jesse said, “It was a rough year for Michelle,” who was taking care of him and young twins. Jesse almost died several times.

“Our life is not easy,” said Michelle, but that doesn’t stop them from having goals.

The two plan to establish the Jesse and Michelle Lieberman Paralysis Foundation. Money raised would be used for spinal cord injury research, educational grants and for items like shower chairs and ramps that would help others with spinal cord injuries be more active and independent.

Through his research, Jesse hopes to develop cardiovascular disease prevention and educational programs for people with spinal cord injuries.

“There are exercise guidelines but no nutritional guidelines,” said Jesse.

Through work and on their own time, the Liebermans try to help others experiencing the effects of spinal cord injuries.

“We are a huge resource for people who have been injured,” said Michelle.

“It was very inspiring to see that someone with physical disabilities, like Jesse, could accomplish so much in his life, and that life didn’t stop even if you were paralyzed,” said Falls, now a pre-pharmacy student at Wingate University.

“Michelle was someone my mother could connect with because (Michelle) has experienced the role of being a caretaker.”

“The fact that (the Liebermans) work so hard and yet stay so positive is very encouraging to me,” said Falls. “I can’t brag on them enough.”

Michelle runs the household like a business, and has “incredibly stable, reliable help,” Michelle said. “It takes a team to make it work.”

On weekends and evenings, Jesse tries to be with the twins as much as he can. He reads to them every night. They love to help him with straps and buttons and to sit on his wheelchair tray and ride.

“I am working to balance things,” Jesse said. “Michelle and the kids are the top priority and the reason that I do all this stuff.”

“Michelle and Jesse exemplify the definition of perseverance,” said Jesse’s father, Michael Lieberman. “They motivate me and anyone that comes into their lives.”