On a roll for spinal cord research 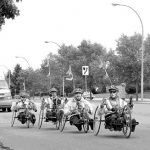 Four Paraplegic men are literally pushing themselves across the country in a bid to raise $10 million for promising spinal cord injury research at McMaster University.

The four athletes, aged 43 to 65, have journeyed more than 5,000 kilometres since they strapped themselves into their hand cycles on June 10 in Victoria, B.C.

So far they have picked up only a few cheques from kind strangers along the way, but they say the main goal of the Wheel to Walk tour is to spread the message about the research being done by the Neurorestorative Group at McMaster.

The Neurorestorative Group brings together McMaster-based and international specialists from a wide range of disciplines, from neurobiologists to kinesiologists, to research and advise each other on workable treatments for neurological conditions, including spinal cord injury and Multiple Sclerosis.

Two years ago, Dr. Shucui Jiang, head of the Neurorestorative Group, and her colleagues discovered that a compound found in the liver called guanosine stimulated regrowth of insulating nerve tissue in rats with spinal cord injuries.

Two weeks after treatment, the rats began to regain the use of their legs and walk again.

The research is unique, says Dr. Michel Rathbone of the Neurorestorative Group, because they have shown a way that could give function back to people who suffered spinal cord injuries long ago, while most studies focus on reversing the damage directly after the injury occurs.

The research has been stalled for two years because of a lack of funds. Rathbone said if the group got the money tomorrow, clinical trials could be under way within two years.

To cyclist Charlie Cetinski, the findings send a clear message.

“The rats are walking again, so I can walk again,” said Cetinski, who said he would volunteer to participate in clinical trials for the treatment.

Cetinski, a Freelton resident, is joined on the road by Les McLaughlin of Brampton, Chuck Mealing of Crystal Beach and Harvey Uppal of Burlington.

The athletes will arrive in Hamilton on Friday and the Lions Club will hold a homecoming event and parade in Freelton on Saturday, hosted by actor Patrick McKenna of the Red Green Show.