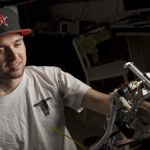 A year ago, professional motocross racer Randy Childers experienced a crash in Texas that crushed his ribs, wrist and several vertebrae. By October he could walk slowly but struggled to turn over a card.

“The thought was, if we’ve got somebody with an incomplete spinal cord injury, perhaps they could benefit from robotics,” said Marcia O’Malley, and associate professor of mechanical engineering at Rice University who led the team that developed the device, dubbed “RiceWrist.”

“The movements that he makes — they become smoother, less variable,” O’Malley said. “Which means he’d be able to do things in everyday life a little easier.”

The robotic exoskeleton, which resembles a sci-fi movie prop, emerged from a stroke rehabilitation pilot clinical study of a joystick robotic device that O’Malley worked on with Gerard Francisco, chief medical officer of The Institute for Rehabilitation and Research (TIRR) at Memorial Hermann hospital.

Other robotic rehab devices focused on the shoulder and elbow, and there wasn’t literature on robotics rehabilitation for spinal cord injuries, O’Malley said. So she and a team of research scientists and clinicians designed an exoskeleton to target the arm’s distal joints.

The robotic device has hardware actuated with motors, and every degree of freedom contains movement-detecting sensors. A patient dons the device and must perform tasks linked to a computer, hitting a target on the screen by moving a certain way. The RiceWrist can provide assistance or resistance, as determined by a physical therapist who oversees the process.

“They must continuously push to move against the target,” O’Malley said. “It’s like moving through honey.”

Childers, who had been undergoing occupational therapy at TIRR, became a one-person trial. He stopped therapy to work with the RiceWrist for two weeks straight.

The team recently started RiceWrist assessments on the first of 10 patients, using a more rigorous protocol. Each person will work with the device several days a week over the course of four weeks. O’Malley said they hope to have statistically significant results at this trial’s end.

David Reinkensmeyer is a professor of mechanical and aerospace engineering, as well as biomedical engineering at the University of California, Irvine. He specializes in technology that can help people retrain movement after they’ve lost it due to a stroke or spinal cord injury.

“You can’t just use the same structure as the human arm because ideally you’d like it to wrap around like ‘Iron Man,'” he said. “The RiceWrist is a really elegantly designed exoskeleton for training people how to move.”

He praised its distal focus and ability to accommodate the forearm and wrist’s degrees of freedom.

O’Malley said that while the device hasn’t been explored for aiding patients with traumatic brain injuries, she has reason to believe it could help.

In addition to being a main collaborator on RiceWrist, Gerard Francisco is a member of the medical team treating U.S. Rep. Gabrielle Giffords at TIRR. Her husband Mark Kelly has asked about the availability of robotics for her rehabilitation, O’Malley said.

In the future, she hopes robotic rehab won’t be limited to special cases, though.

“If robotics could provide this kind of care to a wider audience, I’d see that as a huge win.”

Many spinal cord injuries from crashes