Elkhorn man competitive as ever despite paralysis 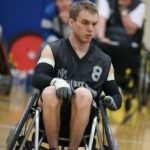 Murderball, anyone? It sounds like blood sport, but it is a team sport for athletes with disabilities.

Murderball is the politically incorrect name that participating athletes have given wheelchair rugby. It’s rough and tumble—literally.

Wheelchair rugby teaches life’s lessons to those who have suffered the hardest of knockdowns.

“I ran into a wall full speed with my head down,” Kramer said of his life-changing accident May 19, 2008.

Kramer fractured three vertebrae and pinched his spinal cord, which caused permanent paralysis from his waist down at age 23.

“I was in the best shape of my life,” said Kramer, who played football at Williams Bay High School and St. Norbert College. “I weighed 190 pounds and not much body fat. I lost 35 pounds in two weeks.’’

Fortunately for Kramer, he found his way back.

“I had the means,” Kramer said. “Wells Fargo (his employer at the time) got me some of the top doctors and cutting edge therapy.’’

The therapy took Kramer to Lakeshore Foundation in Homewood, Ala., and murderball. Kramer found competitive people like himself working to put their lives back together.

“They kept picking at me to sign off on a waiver (to play rugby),” said Kramer, who could not resist the taunts. “Six months after my accident, I came to practice.’’

“There were people 20-25 years older than me,” Kramer said. “They were pretty independent, and I learned a lot from them.’’

Wheelchair rugby is played indoors on a hardwood court. The rules include elements of wheelchair basketball, ice hockey, handball and rugby union.

“If you can knock somebody down (when they are driving for a goal), more power to you,” Kramer said. “My game chair is pretty dinged up.’’

Four players on each team have 12 seconds to advance a ball from their backcourt into the frontcourt and a total of 40 seconds to score a point or concede possession.

It took Kramer a while, but he learned the training ropes for the game.

“It’s a completely different workout than I’ve ever done in my whole life,” said Kramer, who keeps fit by working out three days a week. “I always powerlifted, and now I lift more for stamina. I do cardio more than I used to.’’

Kramer plays for the Milwaukee Iron. The team travels to tournaments throughout the country.

“We go to tournaments once or twice a month, depending on what we can afford,” Kramer said.

Kramer would enjoy playing more rugby and even taking a shot at a U.S. team tryout for the Paralympics, but working as a business manager at Kunes Country Ford in Delavan takes up his time.

What is not out of the question is Kramer’s competitive edge for rugby and life.

“People assume that everything is so bad,” Kramer said. “But there are so many things in my life after my accident that are so much better than before my accident.’’

After it all, Kramer is standing tall and proud.