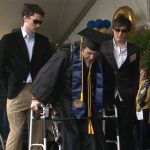 A paralyzed student walks again, with the help of a new technology.

Last Saturday, at UC Berkeley’s commencement, something like a miracle happened. That, at least, is the way one’s tempted to describe it. Technology had enabled the sort of healing common to Biblical narratives or reports from the shrine at Lourdes. A paralyzed man walked again.

His name was Austin Whitney. The 22-year-old graduating senior had lost the use of his legs in the summer of 2007, when, after having a few drinks, he crashed his car into a tree, severing his spine above the hips. He later quit drinking, mustered the will to go to college, and by the time he reached Berkeley for his sophomore year, found himself to be in the right place at the right time, reports the San Francisco Chronicle.

At Berkeley, a professor of mechanical engineering, Homayoon Kazerooni, had been working with a team for several years on a robotic exoskeleton. At first, Kazerooni’s Robotics and Human Engineering Laboratory–“the Kaz-Lab,” it’s been dubbed–had been developing its technology for very different purposes: military ones. A 2004 story from UC Berkeley News announced a “breakthrough” from the Kaz-Lab (ushered in with the help of a boatload of DARPA funding) that would enable a solder to wear a 100-pound exoskeleton and 70-pound backpack “while feeling as if he were lugging a mere 5 pounds.” The 2004 project cleared many of the initial research hurdles that would eventually help Austin Whitney walk. Kazerooni et al. taught their exoskeleton to be able to work dynamically with the wearer: “the control algorithms in the computer are constantly calculating how to move the exoskeleton so that it moves in concert with the human,” he explained at the time.

In 2005, the following year, Kazerooni spun out some of his research into a company called Berkeley Bionics, and a few years after that, Austin Whitney first got in touch with the Kaz-Lab. Whitney worked with the team for several years, helping them hone a design for paraplegics. The Chronicle lists a host of influences Whitney had on the final design: flatter feet for greater stability; locks on the hand controls; crutches with telescoping legs. So integral was Whitney to the process, the roboticists even nicknamed the exoskeleton “Austin.”

Other companies have developed similar technology to Kazerooni and co’s. Robotic exoskeleton research is actually a burgeoning field, and not just one limited to the Iron Man films. In January, the FDA approved an Israeli-made device called “Rewalk,” invented by a quadriplegic named Amit Goffer. And just a few weeks ago, the New Zealand company Rex Bionics made its first sale of a custom-robotic exoskelton to a man with a spinal cord injury named Dave MacCalman–a man who “holds the current World Record for quadriplegic pentathlon.” The Berkeley device, though, is cheaper than these, running just $15,000, or the cost of a high-end wheelchair. (Rewalk, by contrast, runs $50,000.)

And on Saturday, it was finally time to debut the technology. Whitney climbed aboard the exoskelton, flicked a switch, and moved one leg forward, then the next, to the sound of the audience’s cheers. In attendance were his parents and younger sister. “Four years ago, doctors told me I’d never walk again,” he told the Chronicle. Never say never.