Attitude is how we react to life 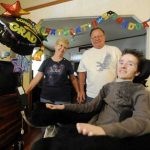 BONAIRE — There are 541 graduates in this year’s senior class at Houston County High School. A sea of caps and black gowns will fill Reaves Arena on Saturday night at the Georgia National Fairgrounds and Agricenter in Perry.

By virtue of the alphabet, and also because he is an honor student, Alex Adcock won’t have to wait long to hear his name called.

He will be seventh in line to receive his diploma.

It’s going to be an emotional evening for the Adcock family. His parents, Joey and Kristy Adcock, will bring the video camera. They also might want to pack one of those bright yellow signs that reads: Caution: Wet Floor.

There won’t be many dry eyes in the vicinity when Alex rolls across the stage in his wheelchair.

“I know I’ll have a lump in my throat,” Kristy said. “I’ll probably have to take a whole box of tissue.”

Alex ranks 19th in his class and will graduate with a 3.97 grade-point average, which puts him in some pretty tall company. Last week, he was recognized on Honors Day for having the highest grade-point average in trigonometry in the senior class. He has received a scholarship to attend Mercer University’s School of Engineering in the fall.

Five years ago, Alex and his family learned how life can change at the bounce of a toe. The accident happened three weeks after he became a teenager and the week after he started the eighth grade.

For years, he and his younger sister, Austin, had begged their parents for a trampoline. Each time, Joey and Kristy firmly said no. “We kept nagging them about it,” Alex said.

In the weeks before Christmas in 2005, some friends no longer wanted their above-ground pool and offered it to the Adcocks. When they threw in a trampoline, too, Kristy and Joey finally consented. The backyard would never be the same.

Joey doesn’t need any reminders about the Sunday afternoon of the trampoline accident. It was his birthday, Aug. 13, 2006. The family had celebrated with a cake at lunch and had planned to grill out and go swimming.

Alex and his sister were jumping on the trampoline, when Austin turned to go into the house. “Watch this,” Alex said. It was a double front flip. He had done it a hundred times.

Only this time he didn’t spin quickly enough on the second rotation. He landed on his head and snapped his spinal cord. When Joey and Kristy reached him, he wasn’t breathing and they both had to perform CPR.

Thanks to the quick action of neighbors, the Bonaire fire department and the paramedics who arrived at the house, Alex’s life was saved, and he did not suffer any long-term brain damage.

He spent two months in a medically induced coma at The Children’s Hospital at The Medical Center of Central Georgia. He had to have emergency heart surgery after an artery was cut while doctors were performing a tracheotomy. Alex lost a lot of blood. “It’s a miracle he is still with us,” Joey said.

Alex spent two months doing physical therapy and rehabilitation at the Shepherd Center in Atlanta, where he was the youngest patient. He has gradually regained partial use of his arms, but he spends most of the time in his wheelchair.

“We were told 50 percent of the people with this kind of injury lose the desire to live,” Joey said. “They just give up hope. We would ask Alex if he was depressed, but he said he never was.”

The community has rallied behind the Adcock family. Some good folks from their church, Bonaire Methodist, built a wheelchair ramp. The inside of the house was modified so Alex could have mobility with his wheelchair.

For the past four years, students in the Houston County school system have collected aluminum pop tabs from soft drink cans in honor of Alex. They are used to raise money for the Ronald McDonald House in Macon, where Kristy stayed when Alex was at The Children’s Hospital.

His family has faith that one day medical research and technology will allow him to walk again. They expect there will continue to be advancements in stem cell research.

Enough money ($21,000) was raised through fundraising and private donations to purchase for Alex an Axiobionics body suit, which uses electric stimulation therapy.

The Adcocks drove to Michigan last Christmas to have it custom made. They call it Alex’s “Superman Suit,” since it was originally designed for the late actor Christopher Reeve, who starred in the “Superman” movies and was paralyzed from the neck down after a horseback-riding accident.

Lori Loos was Alex’s counselor at Bonaire Middle School. She then moved to Houston County High, where she has continued to be inspired by his determination during the past four years.

“After the accident in the eighth grade, he didn’t come back pessimistic or hopeless,” she said. “He had a great attitude. He was determined to do the best he could in his school work, and that has carried over to high school.”

As a senior, Wednesday is the last day of school for Alex.

Although he won’t be giving any speeches Saturday night, he carries his message with him like a personal commencement address.

We’re all in charge of our own attitudes. Life is not about what happens to us, but how we react to it.