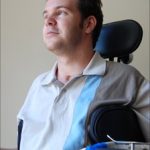 Paralysed from the elbows down and confined to a wheelchair, Dan Eley could be forgiven for being bitter with life.

The 33 year old from Witley broke his neck while teaching in Colombia.

Unable to afford the specialist flight home an internet campaign raised enough money to bring him back.

But the former charity worker is now planning to return to Colombia to realise his dream of setting up charity for homeless children.

It was New Year’s Day 2010 while swimming in a Colombian lagoon that Dan’s life changed for ever.

“We were larking around and I was standing in water,” he said.

“I dived under and must have hit my head on a sandbank. I broke two vertebrae and the bone splintered and went into my spinal cord.

“My next memory is lying on my back and looking at a girl who said she had called an ambulance.

“I told her not to worry, that I felt fine. But then I tried to move my arms and realised I had broken my neck.”
‘Big black void’

Taken to a basic clinic in the jungle, which only had three beds, his breathing deteriorated and he started to suffocate.

He was flown out of the jungle with only hours to spare and moved to a hospital in the Colombian capital, Bogota.

But here he was still in a desperate situation and his heart stopped three times, during which he said he had “terrifying visions”.

“The first two times I felt I was moving on a conveyer belt towards a big black void, like a hole in the ground,” he said.

“But the final time my heart stopped I had a different vision where I was flying and surrounded by colours and felt full of wisdom and happiness.”

While fighting for his life an internet campaign began on Facebook, organised by the grandson of a family friend, which raised £100,000 in only five weeks.

Flown back to England, in what Dan described as the “worst journey ever”, he was taken to the specialist Stoke Mandeville Hospital, in Buckinghamshire.

He stayed there until November 2010 when he was ready to move to the Hydon Hill Cheshire Home, near Godalming, so he could be closer to his family.
Charity work

Dan said he is convinced within his lifetime there will be a cure for his condition and he is now focusing on his trip back to Colombia in September.

“I’m trying to set up a charity for older children that are working on the streets in Cali, which is where I taught English” he said.

“It’s an idea I had before my accident. There’s also a specialist rehab centre for spinal injury patients where I will undergo intensive treament.

“These are the things that keep me going. They stop me going mad and giving up.”

And Dan said he is still humbled by support he received from total strangers and the new friends he has made since his accident.

“There’s so much that I have lost, but there’s also so much I’ve gained,” he said.