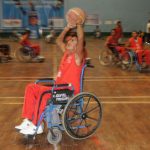 Similarly, Himal Aryal was caught in an ambush set up by Maoists in Bhimphedi, Makuwanpur eight years ago while Tilak Pokharel met a similar accident in Salyan during the insurgency. Aryal and Pokharel also sustained spinal cord injuries.

All army men, who were so full of life, were condemned to wheelchairs for life after the accidents.

However, they didn´t give up hope and with the help of Nepal Army Rehabilitation Center they have sprung back to life as “spinal cord injured athletes”.

Shrestha, Aryal and Pokharel are in the wheelchair basketball team of Nepal Army. No wonder, the team has become an inspiration to other players as well.

“It was good to see them playing basketball. They were swift in the game and it obviously inspired us to do better,” said Sujan Pun, basketball player from Golden Gate College.

The Army team played exhibition match against a team of Wheelchair Sports Association, Nepal on Tuesday during the final of National Basketball Tournament and won the match 6-5.

Not only the ones injured during the insurgency but other army men injured in various accidents have also been included in the team. Phani Narayan Paudel, who was deployed at the Chitwan National Park, had sustained spinal cord injury when a one-horned rhino hit him some 14 months ago.

“Our center has rehabilitated 60 people with spinal cord injuries. Some of them were civilians. We now have around 18 basketball players being trained at our center,” said Brigadier General Dr Bachchu Ram KC, chief of Nepal Army Rehabilitation Center, Bhandarkhal. “We provide medical support and vocational trainings to the injured,” said KC. The Rehabilitation Center was set up in 2064 BS.

The need for setting up the center was felt after several army men sustained spinal cord injuries during the insurgency. “The center wants bring the injured back to their normal lives and sports help them a lot,” said Brigadier KC. He also expressed delight at the progress shown by the injured players in the basketball event.

Not only the Army team but also a team of Wheelchair Sports Association, Nepal has been using sports as a means to rehabilitate its patients. The association´s team includes Krishna Chaudhary, Digam Singh Chemjong, Raju Gurung, Dinesh Khadka, Jay Karki, Sarita Koirala and Jyoti Aryal. Chaudhary is a polio patient while others had picked spinal cord injuries in accidents.

“Basketball is exciting to watch and play. It gives us a sense of unity,” said Chaudhary. “I always feel the clock running faster when I´m in the basketball court,” he added.

Basketball coach Raj Kumar Maharjan has been training the Army team as well as the association´s team. “There are talented players in both the teams and they can do well in future if they are given international exposure,” said Maharjan.

Nepal Basketball Association President Lama Tendi Sherpa also said that the association has been planning to promote wheelchair basketball in the country.

“We have introduced wheelchair basketball officially during the National Basketball Tournament. Now we are planning special training sessions for the players of Nepal Army, Nepal Police and other organizations working in the field of the differently-abled people,” said Sherpa.

“We have officially written letters to the International Wheelchair Basketball Federation (IWBF) headquarters in Canada and it has pledged its support to us,” he added.