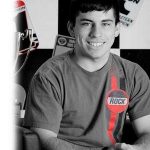 The Free Press introduced readers to Johnson a couple of years ago, when he was racing go-karts with hand controls and preparing for experimental stem cell surgery as a result of a motorcycle racing accident in Sarnia, Ontario, in 2005. He fractured his T5 and T6 vertebrae in the accident and was left without movement from the waist down.

Since the surgery in Portugal in 2009 and with daily therapy at Walk the Line to Spinal Cord Injury Recovery in Southfield, Johnson has taken the racing world by storm, becoming the first paralyzed racer to win an open-wheel event during the Skip Barber Summer Series at Watkins Glen International in upstate New York earlier this year.

Since then, Johnson has added to his victory column with two wins at Road America in Wisconsin and a couple of third-place performances as well.

Johnson’s goal is to walk by himself again and move up to IndyCar racing.

Next year, he’ll compete in the Cooper Tires Presents US F2000 National Championship powered by Mazda series — step one of the Mazda Road to Indy championship.