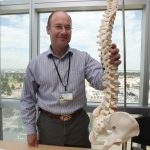 Stephen Davies was lying on a paradisal beach in southern Thailand at 23 when all of a sudden, an overwhelming sense of work ethic washed over him.

For 10 months, Scottish-born Davies had been gallivanting around the globe, visiting cities in the United States, New Zealand, Indonesia, Australia and Malaysia. He had just graduated with a bachelor’s degree in biology from Sussex University in England and was about to embark on yet another trip when the trajectory of his life changed course.

“I thought, you know what, it’s time to go back and start doing something a little more intellectual and challenging,” he said.

Anyone with a spinal cord injury or a disease that affects the central nervous system like Alzheimer’s or multiple sclerosis should be grateful for Davies’ coastal epiphany.

Now, at 46, Davies is an associate professor in the Department of Neurosurgery at the University of Colorado School of Medicine, and he’s making breakthroughs in science to promote functional recovery in patients with spinal cord injuries.

Over the past two decades, he has identified barriers to new nerve fiber growth, and he’s restored rats’ ability to walk after spinal cord injuries. He’s also found new uses for a molecule called “decorin,” a naturally occurring protein found in people, animals and plants.

Ultimately, his research could mean embarking on new levels of recovery and improved quality of life never before imagined for people with mobility issues and brain impairment associated with central nervous system damage.

And it all began with an advertisement in a newspaper.

Instead of going on his planned escapade to India, Davies hopped on a plane from Singapore to England and saw an ad for a coveted technical researcher position in London. The son of a prominent facial reconstructive surgeon and a nurse, Davies had long been interested in developing new technologies for repairing chronically injured or diseased brains and spinal cords.

The behind-the-scenes, research side of science intrigued him most. All of the applicants for the research position in London were first-rate honors graduates, but Davies’ globe-trotting experience landed him the job. He didn’t know it at the time, but the independent and strong-willed spirit he acquired from his travels abroad would translate well in the research community.

“It really helped me sort of mature, it gave me self confidence. And in this field, you need to have confidence to try and do things that other people haven’t done before,” he said.

A few years later in 1997, during a “Sunday afternoon experiment” in a laboratory in Cleveland, he made a discovery that pinpointed scar tissue as the major barrier to re-growth of severed nerve fibers in a spinal cord injury.

Davies knew that the research he was embarking on when he was transplanted from England to a lab in Cleveland in the late-1990s was anything but trivial. In the United States, more than 1 million people suffer from disabilities resulting from a spinal cord injury. Perhaps the most well-known spinal cord injury patient was Christopher Reeve, the actor who played the dashing, heroic Superman. Reeve became paralyzed after he broke his neck in 1995 in a horseback riding accident and died in 2004 from complications after a pressure sore became infected.

Depending on the severity of a spinal cord injury, a person could end up paraplegic or quadriplegic and also have problems controlling bladder and bowel movements or sensing their surroundings. That’s because the different nerve fibers in the spinal cord that relay limb control signals from the brain and sensory information from the body to the brain are often injured simultaneously.

There is currently no FDA-approved treatment for spinal cord injuries, which are usually caused by car accidents and falls in people who are older than 65, Davies said. That’s why on a Sunday afternoon in Cleveland in 1997, he was anxiously anticipating the results of an experiment. He had surgically implanted neurons from an adult rat into another rat’s spinal cord, just beyond the injury. The next Friday evening, he and his graduate student girlfriend, Jeannette, (now his wife and colleague) observed the nerve fiber activity under a microscope. It was 11 p.m., and the scene as he described it was “geeky.” The nerve fibers from the transplanted adult neurons were crossing from one side of the rat’s brain to the other, and he found that the scar tissue was the major barrier to the regeneration of nerve fibers.

In 2006, he made his next breakthrough at Baylor College of Medicine in Houston, which he said was so significant that it surpassed his first discovery. Davies decided to try something unique instead of conforming to the widely held belief that one of the best ways to repair the spinal cord is to inject cells from other parts of the body.

“To me that’s akin to taking parts from your refrigerator and trying to repair your car,” he said. With the advent of stem cell technologies, Davies realized that scientists not only had the ability to make neurons, but also astrocytes.

Astrocytes, once believed to be just the “glue” to hold neurons in place, are cells that are now realized to play important roles in the function of the normal and injured brain and spinal cord. Davies said recent studies have shown that in addition to promoting the formation of connections (synapses) between neurons, they also regulate the flow of signals across synapses within networks of neurons.

Working closely with scientists at the University of Rochester in New York, stem cells were shipped to Davies’ lab and then instructed to turn into different types of astrocytes.

The Davies research team discovered that by implanting a specific type of beneficial astrocytes into a rat’s spine immediately after making the spinal cord injury, the scar tissue — the main barrier to nerve fiber regeneration — was suppressed. Also, 40 percent of nerve fibers re-grew across the injury site. Astrocytes, Davies found, could be used as a bridge for nerve fiber regeneration between one side of the injury to another — a realization more noteworthy than the former.

“This is even better, because now we’ve come up with a new way of repairing the nervous system as opposed to finding out what the major problem was,” he said. Within two weeks of implanting astrocytes in the spinal cord-injured rats, they were practically back to normal, with recovered brain control of mobility.

Because of the strides Davies and his wife made in spinal cord injury recovery research, he was recruited by the University of Colorado School of Medicine in 2007. Now, the team, which includes seven lab workers who are mostly students, are researching the effects of astrocytes and decorin, a sugar protein molecule that is naturally occurring in people and animals. Infusion of decorin into spinal cord-injured rats has also proven to be highly effective at suppressing scar formation. Eventually, the team will merge these two lines of research together to hopefully promote even better levels of recovery even after very severe injuries in the spinal cord. Ultimately, the research could provide effective therapies for injuries and diseases affecting the nervous system that have plagued humanity for centuries. But in order to begin the transition from experimenting on rats to humans, more money is needed. Federal funding for research has been scaled back considerably because of the economy, and, like many researchers, Davies is now also having to rely on other sources.

“The way the economy is, funding support from foundations and private individuals is having a huge impact on the ability of medical researchers to move discoveries from the lab to the clinic,” Davies said.

But Davies, an incessant optimist, is confident that his work will yield effective therapies for future generations of spinal cord injury patients. He’s a thrill-seeker in and out of the lab, and is always on the lookout for his next rush. Aside from his research, he is bent on putting his race car drivers’ license to use in the near future and maybe taking his V8-powered Lexus IS F for a spin at High Plains Raceway in Byers. “I am just burning up to get back on the track but have just not had the spare time,” he said.

Enthusiastic and eloquent, Davies is used to thinking unconventionally, breaking barriers, and overcoming obstacles. And he says there’s no better feeling than when he accomplishes that under a microscope.

“It has the most wonderful effect on you,” he said. “You get to interact with nature in ways that can help mankind. This is what really drives me.”

Everett taking nothing for granted