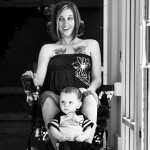 The last thing Christa Sexton remembers is the fire truck careening toward her.

When she woke up, face down on the warm highway asphalt, life as she knew it had radically changed.

“I remember it perfectly – everything except for the impact, which is blanked out,” Christa says. “I could see two guys with firemen helmets on, telling me ‘don’t move, don’t move,’ but strangely, I didn’t hurt at all. I was just floating, in and out of consciousness.”

It wasn’t until later at the hospital that she was told that she had a critical spinal cord injury.

She would spend the next three months in a hospital with an incomplete break of a neck vertebrae, and that was just the beginning. She had no use of her arms initially, her hands were useless, and she was confined to a wheelchair with most of her body paralyzed.

“I had to learn how to feed myself, had to figure out a way to write without use of my fingers. I didn’t have any control of my trunk, any balance, so they had to use restraints so that I wouldn’t fall right our of my chair.”

It was the suddenness of it all that hurt the most.

As a student at Newell-Fonda High School, Christa had moved at warp speed – cheerleading, theater, choir, art, friends, planning to go to college to further her artistic abilities. “Not being able to walk was really hard for me to cope with because it wasn’t a gradual thing – one day I could, the next I couldn’t. One minute I was doing all this stuff, and the next it seemed like I couldn’t do anything.”

The day of her crash is burned in Christa’s memory. One moment, it seemed as if she had it all – an exciting new home in Albuquerque, New Mexico, plans for an upcoming wedding, a beautiful two-month-old son, a job she loved as a certified nursing assistant, a passion for creating art, an active lifestyle of perpetual motion. She was on the back of her fiance’s “crotch rocket” motorcycle for a joy-filled ride on one of those days on the cusp between spring and summer, the kind that seems like it will go on forever.

And then, as if in slow motion, that fire truck in front of them… something wrong… it was veering head-on at them…

Christa has fought back from critical condition and helplessness, making up for her paralyzed limbs with sheer will.

The single mom cares for her energetic son Carter, still from her wheelchair. She has relocated closer to family, in Spirit Lake, and within months of her accident, had landed a job. She now works two positions, at Arnolds Park Amusement Park and Walmart. With a specially-fitted vehicle, she is able to get around without help. Although her fingers mostly still don’t respond, she has learned to roll a paintbrush between her knuckles to again express herself artistically.

“I still get a little better each year, and I consider that things have gone pretty good,” she smiles.

And she has never stopped hoping and researching for a medical breakthrough that will allow her body to further recover.

For two years she has been on the waiting list for The Miami Project. The program, based at the University of Miami’s medical school, brings together a multidisciplinary team of neuroscience clinicians and scientists dedicated to finding new treatments for spinal cord injuries, including pioneering the new Schwann cell transplant.

She has just learned that she has been accepted to the program, and will soon travel for three days of intensive testing and lab work that may be a first step to realizing her hopes. If The Miami Project can help her, she will have to relocate to Miami for a few weeks to several months to take part in the cutting-edge stem cell trials.

“I’m extremely excited,” she says. “This is a huge opportunity, I realize that this is just research and still experimental – I know that it might not work, but I have to try.”

She says the Miami Project has already had some success stories. A former football player who had been left paralyzed is now walking again. Others have regained use of muscles or recovered long-lost use of their fingers.

“The ultimate would be to walk again, but I’m realistic, and the odds are that will probably never happen. But getting some use of muscles back or some motor control would be amazing,” she said, noting that she is thankful for her previous work in the medical field, knowledge that helps her understand her chances and the slow but constant march of medical advancements. She is also aware that by taking part in the experimental trials, experience doctors have with her may help someone else down the road. “It’s coming – three years ago, stem cell research was nothing compared to what it is today.”

Fund drives have been set up in Christa’s name at Citizens Bank in Storm Lake, and Northwest Bank in Spirit Lake, to help her expenses in traveling to and staying at the research facility in Florida. Planning is underway for a fundraiser in September in her hometown of Newell, where her parents Mike and Julie still reside.

“They had a fundraiser for me in 2010 while I was still in the hospital. I wish I could have been there. Being from such a small town, the people there have been very, very supportive for me. I can’t put into words how grateful I am.”

Meanwhile, life goes on for Christa, busy as ever and relentlessly upbeat.

“In the three years, it gets easier. The more time goes on, the more I find I can do,” she says. “It is still tough at times. My son goes to swimming lessons, and I can’t play in the water with him. I can’t play in the snow with him in the winter. It’s normal to him because he doesn’t know me any other way than being in this Powerchair, but I do feel bad that I can’t do all the stuff other mothers may be able to.”

Wasting time feeling sorry for herself has never been on Christa’s agenda.

“From the beginning, I was tired of sitting at home. I didn’t want to collect disability and live off the government. Anyone who knows me will tell you I’m an extremely independent person – I want to work and volunteer and help people and do all kinds of things.”

One of her goals is to get elected to the local school board by the time her son is in school.

She continues her artwork, drawing and painting. While there are assistive devices to help paralyzed people produce art, Christa would rather do it on her own, learning to use whatever movement she has. While she has produced some commissioned work, she sees her art as intensely personal and never wants it to be a career. She is currently working on a large-scale mural in her home, and recently was able to volunteer as a judge for an art show back at her alma mater in Newell. She may volunteer in teaching art one day.

While working her two jobs and tending her son, Christa has also continued her education, working toward a degree in human services.

“I’m a fixer,” she laughs. “I want to be a substance abuse or behavioral disorders counselor. If I don’t ever walk again, hey, at least I tried. I’m not just going to put my life on hold to wait for something that might never happen for me.”

A shattering crash, an online chronicle, and an unexpected twist