Paraplegic guitar builder in tune with his craft 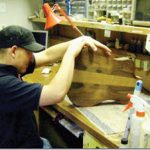 Orders for custom built guitars are backed up these days for Mike Trelenberg, a luthier from 100 Mile House who now makes his home in Kamloops.

Noting it’s a little overwhelming at times, the 28-year-old says he just deals with it, much like he has with other tough things that life has thrown his way.

Trelenberg, who is paraplegic, is the sole builder of handcrafted Riversong guitars at Lee’s Music, on Battle Street. He was also the inspiration.

How he came to be a luthier involved a twist of fate, a love of music and more desire than money to own a really great guitar.

The journey started at the age of 14, when Trelenberg suffered a spinal cord injury while riding a motocross bike.

“He was going through a rough time,” says his mom, Jacquie. She and her husband, Dennis, bought their son a second-hand guitar for Christmas one year, hoping it would interest him. It proved to be a good investment.

“He just took off with it. That was the best thing we ever did,” she says.

The thought of training as a musician crossed his mind, but Trelenberg couldn’t envision a secure future in the field, so in 2002, he followed up on an ad he’d seen about the Summit School of Guitar Building and Repair on Vancouver Island. The class was very small and teacher/student ratio was high for the intensive course.

It was quickly realized that with Trelenberg sitting in his chair, there would be problems with him seeing over the tops of table saws. To help him work with the different heights of the various power tools and work benches, his wheelchair was fitted with hydraulic arms, rather than having the workshop modified to suit his needs.

After completing the one-year course, he landed a job at Lee’s as a guitar repairperson and spent his spare time building guitars at home.

“There were lots of guitars that I wanted, but I couldn’t afford them. It thought I could build one cheaper myself.”

He brought one in to work one day and showed it to his boss, Mike Miltimore. It not only sparked the birth of Riversong guitars, but it was also the beginning of a career that makes Trelenberg happy to go to work each day.

He builds the guitars from scratch and many are custom orders that are “limited only by customer’s imagination and pocketbook,” he says.

Specialty woods, such as mahogany, maple and rosewood, go into many of the instruments, but he’s also worked with rare and expensive woods, such as flamed koa from Hawaii.

Attention to detail and careful craftsmanship is something that Trelenberg has developed over the years.

It’s a must with the line of guitars, including one of the popular models called the Heirloom series, as Trelenberg inlays the signature of his customer in a fret of the instrument and also writes a message on the inside of the body. The idea is the guitar will later be passed on to another family member, and they will have their signature inlaid, and so on, down the line.

Miltimore has whole-heartedly jumped onboard with the guitar line, recently increasing production space by 2,000 square feet and investing in new equipment.

“He’s been really good in supporting this,” says Trelenberg. “He’s invested a lot in this side.”

Plans are in the works for a production model and they also have a patent pending on the production side of things, he adds.

As for saving money by building a guitar for himself, the craftsman says he was wrong.

His base models sell for about $1,400, while the highly customized ones go for $5,000 and more, and considering the great amount of time that is invested into each one, the values are warranted, he says.

With a steady backlog of guitars on order, Trelenberg doesn’t have the time to play guitar like he used to, but he’s fine with that. Plying his craft is just as much a pleasure as it is a job and he’s happy to be working in a facet of the music industry.

As for being in a wheelchair, he says it’s tough, but on the other hand, he feels fortunate that it happened early in his life.