Kelly Brush- Skiing with a purpose 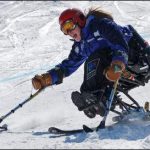 It would be understandable if Kelly Brush filled her days with what-ifs.

What if the fencing along the giant slalom course at Jiminy Peak had been better? What if the padding on the chair lift tower had been thicker? What if she hadn’t caught that edge?

But those questions don’t yield any substantive answers. They are part of a past that Brush, a senior at Middlebury College who was paralyzed in a ski racing accident two years ago, doesn’t see the need to dwell in.

Instead, Brush is focused on the future — her own and that of the sport she loves. Through the Kelly Brush Foundation, the 21-year-old is seeking to improve safety conditions and safety awareness in ski racing.

Safety is often overlooked in ski racing, Brush says, but she is working to change that. Just recently, the foundation granted its first round of donations — $35,000 to ski clubs around the country to help purchase protective equipment.

As someone who grew up ski racing, Brush knew the inherent risk the sport possessed and endured her fair share of accidents. On Feb. 18, 2006, Brush fell while competing in the giant slalom race during the Williams College carnival.

It is likely she was traveling upwards of 50 mph when she flew out of control and crashed into a lift tower that was just beyond the safety fencing on the side of the course.

Ideally, the fencing would have continued down the length of the course and it would have caught Brush before she came close to the tower. Ideally, the tower would have been more substantially padded. But the fencing stopped short and the padding was inadequate, and Brush broke her back between the T7-8 Vertebrae.

She spent 2 1/2 weeks at a hospital in Massachusetts before transferring to the world-renowned Craig Hospital, a spinal cord injury Rehabilitation facility in Englewood, Colo.

Brush lived at Craig for 2 1/2 months learning how to function with complete Paraplegia — the full loss of sensation and Motor nerve function below the injury site; mid-torso for Brush.

While at Craig, she met a number of ski racers in similar situations. Determined that something good would come of her injury, Brush and her family discussed setting up a foundation to target safety in ski racing, as well as the treatment and cure of spinal cord injuries and helping Paraplegic athletes obtain the expensive equipment they need.

When Brush returned to her home in Charlotte after her stay at Craig, the seeds for the foundation had already been planted.

That fall, the Middlebury College ski team held a 100-mile bike ride to raise money for Brush. It yielded more than $65,000 and helped Brush buy adaptive sporting equipment including a mono-ski and a hand-cycle.

This year, the century ride was opened to the public and raised $90,000 for the Kelly Brush Foundation. With that money, the foundation bought a Nordic sit-ski for a woman in Jericho and awarded grants ranging from $250 to $2,000 to ski clubs as a part of its injury prevention campaign.

One of those grantees was Green Mountain Valley School in Waitsfield, Brush’s alma mater. Headmaster Dave Gavett said Brush’s injury has opened a lot of eyes locally to the need for increased safety measures in ski racing, but that “it’s a never-ending battle.”

“Things have gotten better since Kelly got hurt, but as a sport we still have a ways to go,” Gavett said.

In the late 1990s, ski innovation advanced at such a rate that safety technology wasn’t able to keep up, said Stever Bartlett, head coach of the Middlebury College alpine ski team. Athletes could ski faster, but they also had less control. Catastrophic injuries like Brush’s were becoming more prevalent.

“The technological demands of the sport allowed skiers to ski with more force and power. Those forces are really tough for the athletes’ bodies to handle,” Bartlett said. “We had to change how we address safety. It used to not be as big a concern.”

Part of Brush’s mission she says is to educate coaches and athletes about the need for safety awareness in the sport. Some coaches are of the mind that they don’t require extra fencing or protective equipment for their athletes, Brush said.

“There’s stubbornness. But a lot of it is not being educated. They don’t know what they need or where to use it,” Brush said.

Brush’s injury was certainly a wake-up call for ski clubs in the region. Trails have been widened, proper fencing and lift tower padding have been installed and attitudes about safety are slowly changing.

At Middlebury, all the ski racers are required to wear back protectors, and Bartlett says they won’t train anywhere that doesn’t have proper protective fencing.

As a result of her injury, Brush has become an accidental activist of sorts. Not only is she pushing for increased safety in her sport, she’s also had to become an advocate for herself as a disabled person.

Recently at Middlebury, Brush participated in an event aimed at making students aware of Disability and accessibility issues. The college rented wheelchairs and allowed non-chair users to try to get around a particular building on campus that is supposedly accessible. Brush couldn’t help but laugh at her friends as they tried to open a door while sitting in a wheelchair.

“All my friends were trying to open the door and struggling with it. It was funny. But they started to get an appreciation for how hard it is,” Brush said. “My friends were like, ‘I can’t believe you can do this.'”

Now that the ski season is over, Brush, who is majoring in film and media, is focusing on her job search. She’s hoping to land a gig at an advertising or marketing agency in either New York or Boston. She’s moving on with her life, Gavett says, but she hasn’t forgotten what has brought her to this point.

The Apple Watch Will Soon Track Fitness for Wheelchair Users