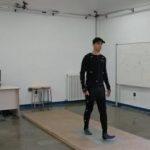 The aim of the project is to design customised assistive devices for each individual case of spinal cord injury. Customisation will improve patient autonomy and facilitate adaptation to the device. It is hoped that the orthosis will improve quality of life for users, save money, and cut the time it takes to acquire the final product.

The first device developed within the framework of the project is an active knee-ankle orthosis. The prototype orthosis was designed and built at the Biomechanics Laboratory of the Barcelona School of Industrial Engineering (ETSEIB), where researchers analyse the dynamics of the human gait and use the results to design body-worn devices that support movement in people with incomplete spinal cord injuries. “The patients these devices are aimed at have limited control over the movement of their knee and ankle joints,” says Josep Maria Font, the UPC researcher responsible for designing the first prototype.

The Biomechanics Laboratory is equipped with an optical system consisting of 12 cameras that measure and capture the movement of the human body while a subject is walking. The system simultaneously measures foot-ground contact force by means of force plates which contain four triaxial force sensors. An electromyography (EMG) system is also used to record muscle activity.

The team involved in the project (made up of professionals in engineering, medicine and orthopaedics) is also developing a computer simulation that will make it possible, based on gait analysis and modelling of the human body, to predict how a person with a spinal cord injury will move when wearing the orthosis. With this information it will be possible to design customised assistive devices for each patient. “The simulation ensures that the orthosis, once it’s made, is as good a match as possible for the end user. It also saves money because it’s no longer necessary to go through a trial-and-error process using real components.”

One of the novel features of this active orthotic device is the mechanical design of the knee joint (developed at the UPC), which incorporates two independent systems for activating and locking the joint. Thanks to this feature, the device provides better support at different stages of the gait cycle than systems currently on the market.

The devices most widely used at present are passive orthoses and exoskeletons. Passive orthoses do not provide external assistance for the movement of the knee. Exoskeletons work with the entire leg and incorporate six actuators for the hip, knee and ankle joints, which makes the system cumbersome and expensive. Moreover, exoskeleton systems, generally designed for paraplegics, are not ideal for individuals affected by incomplete spinal cord injuries, who do not suffer from complete paralysis.

The system developed at the UPC incorporates technology midway between robotics and orthopaedics. The result is a lightweight device that is more economical than other alternatives. Another novel feature is reduced energy consumption, which translates into greater autonomy. This is achieved by using a mechanical knee locking system rather than an electrical system of the type used in other orthoses and exoskeletons currently available.

Now that the active orthosis prototype has been built by the UPC team, a group at the University of Extremadura’s Department of Mechanical, Energy and Materials Engineering will continue the project. Their role is to design and install the electronic system that controls the movement of the device. The motor, located to the side of the knee, is activated and deactivated based on information received from two sets of sensors: plantar sensors, which detect foot-ground contact, and sensors that measure the angle of joints to determine what stage of the gait cycle the user is at. “The device is a means of assisting muscles affected by a spinal cord injury,” says Josep Maria Font.

The role of the Mechanical Engineering Laboratory of the University of A Coruña, the overall coordinator of the project, is to develop a dynamic simulation program to predict how a person with a spinal cord injury will move when wearing the orthosis. The device will be tested on patients at Juan Canalejo Hospital in A Coruña, a facility linked to the university. Testing will serve to validate the simulator and wider use of the orthosis.

The Biomechanics Laboratory, which is attached to the UPC’s Biomedical Engineering Research Centre and its Department of Mechanical Engineering, focuses on dynamic analysis of human gait. The facility, located in Building D of the Barcelona School of Industrial Engineering, supports the University’s teaching and research activities, as well as providing services for businesses in the orthopaedics, footwear and sports sectors.

It is equipped with an OptiTrack optical motion capture system with 12 infrared cameras, which is used to measure the movement of relevant segments of the human body during the gait cycle. The system has a walkway with two force plates to measure foot-ground contact force. The laboratory was recently equipped with an 8-channel wireless electromyography (EMG) system to record muscle activity during movement.

What is a spinal cord injury?

Spinal cord injury, or myelopathy, is an alteration of the spinal cord that can result in loss of sensation and/or mobility. It can be caused by trauma due to car accidents or rupture of the intervertebral disc, or by some diseases, such as poliomyelitis, spina bifida, primary or metastatic tumours, Friedreich’s ataxia, or hypertrophic osteitis of the spine.

Spinal cord injuries can be “complete” or “incomplete.” A complete injury leads to loss of motor function below the injury site, while a person suffering from an incomplete injury may have some sensory function below the injury site. Those with incomplete injuries may be able to move one limb more than another. They may also have sensation in parts of the body they cannot move, or have more functionality in some parts of the body than in others.