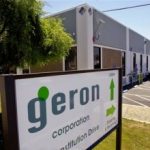 The biotech firm showered scientists with millions of dollars to develop a treatment to reverse spinal damage. The therapy was the first treatment derived from embryonic stem cells to be cleared by the Food and Drug Administration for testing in humans.

But last week, Geron abruptly pulled the plug on its pioneering trial and the rest of its stem cell business, including early work on treatments for heart ailments, diabetes and other diseases. Pursuing futuristic cures through regenerative medicine was financially riskier than focusing on the company’s two cancer drugs, which were further along in development, company executives said.

People who had pinned their hopes on stem cells reacted with dismay.

“It was like someone ripped my heart out,” said Sabrina Cohen, who was paralyzed in a car accident in 1992 and runs a research foundation in Miami.

At first blush, Geron’s decision called into question the plausibility of curing diseases with embryonic stem cells. They have the ability to grow into any kind of cell in the body, and laboratories around the world have spent hundreds of millions of dollars trying to turn them into replacement parts such as insulin-secreting islet cells for people with diabetes.

Geron, based in Menlo Park, Calif., was always fighting an uphill battle, seeking funding for a venture fraught with medical and regulatory obstacles at a time when skittish investors wanted certainty. Faced with dwindling resources, Geron had a safer option and ran with it.

“Companies are looking to double down on their most promising programs,” said Dr. George Daley, director of the stem cell transplantation program at Children’s Hospital Boston.

Geron made history in January 2009, when the FDA allowed it to test the safety of a stem-cell-based product known as GRNOPC1. Scientists hoped the therapy would help rebuild fragile neurons in the spinal cord that were damaged in car crashes, falls and other accidents, restoring sensation and mobility to paralyzed patients. The first of five patients to participate in the Phase 1 safety trial got an injection in October 2010.

Everything seemed to be proceeding smoothly. In May, the California Institute for Regenerative Medicine granted Geron a $25 million loan to support the trial. In October, Geron reported that four patients who had received doses of GRNOPC1 tolerated the treatment well.

But Geron’s funds were running low. Rather than try to raise money in a tight market, the company decided to devote the roughly $150 million it had left to push its two cancer drugs through ongoing clinical trials.

Geron announced last week that it would eliminate 66 jobs and seek “partners” to take over its stem cell business.

That the decision apparently had everything to do with money and nothing to do with the science frustrated patients such as Cohen. “We have all the ingredients to cook the omelet, but we don’t have the pan,” she said.