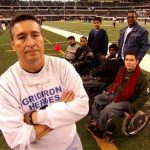 Spinal cord injury group’s founder is up for national honor.

Eddie Canales will learn Sunday night whether his eight-year-old Gridiron Heroes spinal cord injury organization will win a national award and a $250,000 grant.

Canales, a Schertz resident, has been chosen as one of 10 finalists to be named CNN’s “Hero of the Year,” an honor given to individuals who make a difference in the lives of others.

The winner will be announced during “CNN Heroes: An All-Star Tribute,” which will take place in Los Angeles.

Houston resident D’Juana Vontoure said that Canales doesn’t need recognition from a national TV network to have earned her respect.

“Just make sure you let them know that Eddie and (son) Chris Canales are amazing,” Vontoure said. “Amazing. There aren’t words that can express my gratitude for all they’ve done for us.”

Vontoure’s son, Devin Hebert, suffered a spinal cord injury and was paralyzed while playing in a junior varsity game for Jersey Village High School in the Houston area in 2008.

After some tough times during the past few years, Vontoure said Hebert will enter the University of Houston in the spring. He will be studying recreational therapy.

It’s a success story that can be traced directly to support provided by Gridiron Heroes, a nonprofit started in 2003.

The genesis of Gridiron Heroes has been well chronicled in San Antonio. Chris Canales suffered a spinal cord injury while playing for San Marcos Baptist Academy in 2001.

Since then, Eddie and Chris have worked to lend guidance and emotional support — not to mention financial assistance — to more than 40 athletes nationwide, including 21 in Texas.

Initially, Eddie quit his job as manager of a UTSA bookstore to care for his son. Now he cares for lots of other kids in the same situation.

“I’ve known Eddie, well, since Devin got hurt,” Vontoure said. “Eddie and Chris have been there to help us through a lot. Eddie personally talked to me on the phone, helping me, (telling me) stuff that you don’t necessarily learn from the hospital. He’s got a great spirit, you know, a great personality.”

Vontoure became emotional as she explained how having the vehicle has changed her life. Before she had the van, transporting her son around town was a chore.

Sometimes, in her exhaustion, she’d accidentally drop her son as she tried to lift him out of the wheelchair and into her car. Smaller than her son, Vontoure said she hurt her back “a couple of times” trying to hoist him out of the chair.

With the van has come independence, which has, in turn, spawned initiative. Vontoure’s son is about to start college.

Snokhaus said Canales deserves some of the credit.

“Eddie’s phenomenal,” Snokhaus said. “He’s just at another level. His passion for what he does is unbelievable.”

Canales has been busy this year.

Over the summer, he presented a cash gift of about $3,500 to a family that helped prevent a home foreclosure in Illinois.

Currently, he’s working to raise $25,000 to pay a premium for a catastrophic injury policy to cover Luis Morales, an athlete at Vega in the Texas Panhandle, who was injured Oct. 17.

Canales learned that he had made the CNN top 10 a few months ago. He said in a phone interview from his home earlier this week that he’s taking the attention in stride.

“Everybody is asking me whether I’m nervous, things like that,” he said. “I’m really not. Every day is like every other day when you have to do what I do. I get up. I bathe my son. What am I doing right now? I’m washing clothes.”

Meanwhile, Vontoure is hoping that Canales cleans up at the CNN awards show.

“If Eddie wins, I think I would just get down on my knees and start crying,” she said.