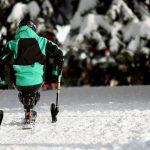 Our lives can change in a moment, and how we deal with those changes makes us who we are. For Josh Dueck, subject and star of The Freedom Chair, life took a sudden turn for the worse when he seriously injured himself during a ski crash.

You know things are going to get emotional the moment the film starts. Soft, almost mournful, music plays as Dueck tells us about the fateful day. We quickly learn this film isn’t going to sugarcoat the reality of Dueck’s situation. It doesn’t shy from Dueck’s feelings, including feelings of guilt for putting himself and his family through the ordeal.

Dueck, a freestyle ski coach to the pros, was living the life he loved when an accident left him permanently paralyzed. His narrative carries the entire film, and with good reason. Director, and good friend to Dueck, Mike Douglas knew Dueck needed to tell his own story.

“It was important to [Dueck], and important to me too, to tell the whole story. While what he’s done is amazing and inspiring, he lives every day with a spinal cord injury. It’s not easy,” Douglas said.

Originally, Douglas planned to make a “webisode” for Salomon Freeski TV. This short was meant to capture some of what Dueck had accomplished using a “sit-ski” (a monoski with an attached seat). But once filming started and they began to talk about Dueck’s story, Douglas realized there was more to tell than would fit in a seven-minute webisode.

According to Douglas, the emotion that comes through when Dueck tells his story is so important that he made the choice not to show footage of Dueck’s accident. Instead, Douglas chose to focus on Dueck’s face. “You just had to look in his eyes and you were there,” Douglas said.

It’s true. Between images of a motivational board filled with encouraging notes from friends and family, the first half of the film is entirely Dueck staring into the camera and explaining exactly what happened and what life was like for him during recovery.

I didn’t miss not seeing the actual accident. You can understand by simply hearing the pain in Deuck’s voice and seeing the change in his face exactly how hard things were.

“If we can tell this story concisely, with all the emotion coming from Josh himself, I think that we have something that’s maybe a little bit unique,” said Douglas.

Emotion isn’t the only thing Dueck supplied. Through Douglas’ editing we get to see the encouraging words and images Dueck surrounds himself with.

The combination of great music, skillful editing and Dueck’s sincerity pulls viewers in. Having watched the film with several different audiences, Douglas can attest to seeing a few shed tears.

It’s not all doom and gloom though. The second half of the film gives us some amazing footage of exactly what Dueck is capable of. Shot using a high definition camera, the sit-ski scenes will leave you smiling.

We learn that Dueck managed to become one of the best in ski racing, taking home numerous medals. Some of the guilt Dueck has drops away as he reaches new goals, but racing was never what he most loved.

It is in the final scenes where we get to see Dueck free ski that the film comes together. I’ll admit I’m normally bored by ski videos, but The Freedom Chair proved to be an exception. The music had me swaying in my seat, nodding my head with a goofy smile on my face. Seeing Dueck do what he loves again and hearing him put life’s trials, and life’s freedoms, into perspective is as rewarding as films get.