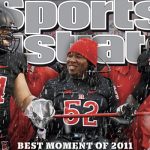 Growing up as a kid, Eric LeGrand dreamed of seeing himself on the cover of Sports Illustrated. He could have never imagined it coming like this, however. LeGrand, the former Rutgers defensive tackle, collided with an Army player in October of 2010, suffering a spinal cord injury, two fractured vertebrae and paralysis. Doctors thought he’d be on a respirator the rest of his life.

Instead, LeGrand continues to amaze them. He’s been working in rehab and, on Oct. 29, was able to join his teammates on the field in a motorized wheelchair. That moment was named the best sports moment in 2011, an award that was voted on by fans, and a photo from that day graces the cover of Sports Illustrated this week. 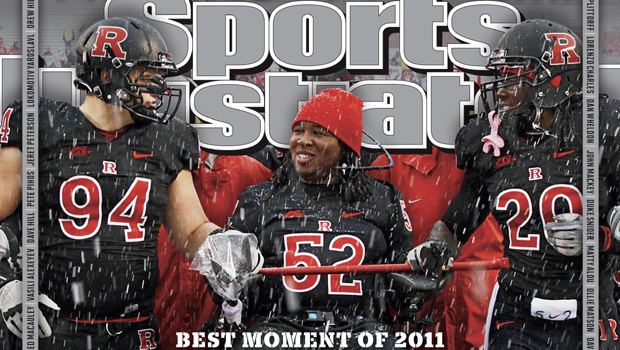 Eric LeGrand joined WFAN in New York with Boomer and Carton to discuss being on the cover of the final Sports Illustrated issue of 2011, how he found out about the honor, how he’s treated when he goes back to Rutgers now, the status of his rehab, defying the odds he initially was facing following the injury, if he realized how serious his injury was when it first occurred, if he regrets playing football and what his prognosis is at this point.

What was your reaction when you found out you were going to be on the cover of Sports Illustrated?:

“It was like a dream come true. Growing up as a kid, you always dream about being on Sports Illustrated. That’s what you read as a kid. That was the main sports magazine growing up. Being on the cover? It’s hard to even put that in perspective. That’s Sports Illustrated right there.”

How did they inform you that they had chosen you?:

“I knew I was nominated, but on Sunday they called my mom for an interview. So she was like, ‘I think you won; I’m not sure though.’ … I actually interviewed Coach Schiano for the first time on Tuesday. I had to do my first interview with Coach Schiano, so I’m heading up to Rutgers, my mom took my phone to call my friend, so I’m not thinking anything. She ended up turning it off on me so I didn’t see any congratulations coming in. … I ended up doing my interview. After I got done with my interview, she walked in and goes, ‘I couldn’t find your phone, but I found this.’ And it was a Sports Illustrated poster of me. … They told my mom on Sunday that I won but they wanted to keep it a surprise.”

What’s it like when you go back to Rutgers now?:

“It’s great. The people just show so much respect to me for what I’m going through. When I just go out and hang out with my friends, you just see random people on the street and some people when you walk by they start clapping, some people ask to take pictures.”

What’s the status of your rehab at this point?:

“Since the injury occurred, I’ve been pretty successful. A lot of people didn’t think I’d be where I’m at today. … I’m doing this walking program that’s five days a week from 3-4:30. I walk for an hour and then I get on the mat and have to sitting up drills. I was able to sit up 35 seconds, 23 seconds by myself. I’m working to get to 30 by myself and just working every day on that. And, actually, the doctors are wondering how I’m doing that. They actually want to run a test on me to see now if I have the motor function below my injury, where I was hurt. So I’m very excited about that.”

So you’re doing stuff now that is defying medicine?:

“Oh yeah. From when they first told me I’d never walk again or come off the ventilator and I’d probably be on a feeding tube the rest of my life, they didn’t think any of this. Now when they see me, it’s like, ‘Wow.’”

When the accident first happened, did you know immediately you were in a lot of trouble or were you unconscious and not really knowing?:

“You know how in Hollywood movies, when somebody gets knocked out, you see stars and everything and the vision gets blurry? … You wonder if that’s the real thing. Well, it is. As soon as I hit, everything was just blurry and I felt like I was seeing stars. When I got on the ground, I just could not breathe. I had the wind knocked out of me and everything. … I was like numb, like when you get it in your shoulder. I was just thinking it was a full-body stinger. … Then I couldn’t move and I was like, ‘What’s going on here?’”

Any regrets about playing football given what you know now?:

“No regrets. I believe everything happens for a reason. I was supposed to play for 15 years of my life. … Now I’m putting my passion toward football in another direction, toward sports broadcasting. It’s something I always wanted to do, so I’d always be around the game of football.”

Are there doctors out there that have projected that you will walk again?:

“I honestly can’t tell. That’s the thing with spinal cord research. I’m trying to spread awareness about it. It’s so unknown and not a lot of people know about it. … You never know because everybody’s injury is different and everyone’s severity of it is different. The way I was, people never I would be where I’m at today, being here able to sit and talk to you. … The doctors honestly do not know.”

Listen to Eric LeGrand on WFAN in New York here