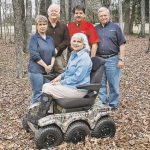 MONROE — Keith Smith suffered a spinal cord injury and lost the use of his legs 20 years ago.

Today, he’s able to maneuver through the woods to hunt or go to the beach thanks to an all-terrain wheelchair designed by several Monroa-area entrepreneurs.

Smith is joined by his wife, Tammie, former state Rep. Charles McDonald, Don Brant and Ron Bush, who are partners of Freedom Mobility LLC, manufacturers of a new 6-by-6 all-terrain wheelchair.

They call their invention the “Freedom Chair” because they want to give everyone the freedom and access to the lifestyle they love.

Smith is an avid outdoorsman who loves to hunt. He has a number of horses on his East Carroll Parish farm, and now he can get out and feed them.

“We’ve gone to the beach and tried it on the sand, and that’s something I’ve never been able to do before,” Smith said. “We’ve gone into the woods through leaves where I normally would get stuck. I can feed my horses with it and get outside when it’s muddy and nasty and still get around on my farm.

“Last winter I got out in the snow and played with it, which is something you can’t normally do in a wheelchair,” Smith said. “I’ve really enjoyed being able to get out on the countryside without worrying about having to call somebody constantly to come pull me out. It’s been nice to have this freedom. It’s been good to see people get outdoors and do the same things I’ve been able to do experience.”

Tammie Smith said she pulled her husband out of the woods in his old wheelchair on more occasions than she can remember.

“Now he can go into the woods and not get stuck,” Tammie Smith said.

She helps her husband promote the new wheelchair, which she hopes will help others like Keith. She says her husband is normally a shy, quiet man, but he never hesitates to talk to others about the Freedom Chair.

“Keith can roll up to someone and say, ‘Have you ever been stuck in that wheelchair.’ That starts a dialogue with people. It’s a wonderful feeling knowing this chair helps someone else,” she said.

“The idea of the whole thing is to give people mobility that they’ve lost. I’ve been in the manufacturing business since 1973, and this has been the most rewarding product,” Brant said. “The people who buy them come up to us and shake our hands and hug our necks and say, ‘Thank you for giving me back something I lost.’ When something happens to you and you lose your mobility, it’s devastating.”

McDonald expects the Freedom Chair will be marketed nationwide in the coming months.

It will be manufactured locally.

“We are the only outdoor wheelchair manufactured in the United States. We’ll be the only one out there that will go outdoors and take you anywhere you want to go and bring you back. It’s been tested in snow, sand, hilly terrain. One of our partners has squirrel hunted off of it,” McDonald said.

The group has already sold a few chairs, and they’ve gotten rave reviews from the owners.

“A gentleman from Beaumont, Texas, bought one and put his 14-year-old quadriplegic son in it and took him hunting for the first time,” McDonald said. “His dad said he was so delighted because he can now go anywhere he wanted.

“We also had a lady in Las Vegas who loved to go to the park with her son. But, if he fell off the slide or needed her help, he had to go to her because she couldn’t go into the sand and the dirt in the wheelchair. She has our wheelchair now, and she says it’s so wonderful because she can go to her child now,” McDonald said.

“There wasn’t anything out there for people who are mobility challenged who love the outdoors, but now they can get back out there to the ballpark, the beach, hunting camps and do the things with their families they like to do.”

Bush is excited for the opportunity to provide a tool to improve people’s lives.

“This has been a dream of Don and Keith’s for almost two years. To see the look in the eyes of those who buy the machine and find out how it’s changed their lives — it’s a wonderful feeling,” Bush said.

“This whole project is all about giving people some freedom and we’re seeing that happen. It’s very fulfilling.”

For every 50th wheelchair sold, the group plans to donate a unit to a person in need. Also, the local non-profit group, Pilots for Patients, receives $500 from every unit sold inside Tyner-Petrus stores.

Written by
SCOTT ROGERS
The News-Star