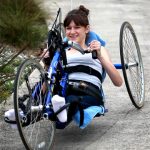 The wheels are in motion for Kirstie Fairhurst as she gears up for the 153km Round the Mountain bike ride next Saturday.

But when the 14-year-old lines up for the event, there will be one difference – she’ll be riding in style on a high-tech paraplegic bike.

New Plymouth Girls’ High School student Kirstie was involved in an accident when she was four years old, leaving her in a wheelchair, which dad Shorty said she had adapted to extremely well.

“Kirstie’s a great kid and she’s really inspirational to other kids at school because she’ll give absolutely anything a go,” he said.

Kirstie, an Urenui resident, hasn’t had much time to prepare for the race after deciding to compete just a week ago.

“I haven’t really done much training but I’m not that worried, we’ll just have to see how we go.”

Kirstie’s interest in cycling began in March last year after she was given a bike by the Mellowpuff and Halberg trusts, but she is still mastering the ins and outs of the advanced bike.

Training had also been fairly difficult – she has been unable to manoeuvre her bike through some of the barriers on her course of choice, the coastal walkway.

“We have to race ahead of her to make sure we can get to the barriers in time to help her through,” Mr Fairhurst said.

The sponsors of the race, Egmont Seafoods, had also come to the party by donating funds for Kirstie’s entry fee.

“We’re really lucky to have been given support from these organisations as well as Kirstie’s uncle Nigel, who backed the whole thing,” Mr Fairhurst said.

She will team up with her brother and sister, as well as Mike Green and Darrel Nicholas, to complete the race.

“The shortest leg is 13km so I’ll probably do that one from the start through to Spotswood,” Kirstie said.

In many ways, next Satur-day’s race is the first part of Kirstie’s ambitious plans, which include competing in the New York Marathon in two years.

Mr Fairhurst said a conversation with tetraplegic Catriona Williams, founder of the Catwalk Spinal Cord Injury Trust, prompted the suggestion of taking part in the marathon.

“She’s done the New York Marathon and reckoned Kirstie could be doing it in a couple of years’ time,” he said.

Mr Fairhurst said winning or losing in the Round the Mountain race wasn’t an issue – it was more about having fun and giving it a go.