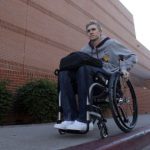 Former Mater Dei baseball player Cory Hahn, who was paralyzed during a college baseball game in February 2011, has returned to Arizona State University to resume his studies this semester. He will come back to Orange County for the first Trinity Bat Company Home Run Challenge, a Cory Hahn Fund charity event on Saturday at El Dorado High.

With every new day for Cory Hahn comes another challenge and another triumph, one that we won’t read about in the baseball box scores or newspaper sports pages that once chronicled the supreme talents of this former Mater Dei All-America outfielder and left-handed pitcher.

His victories in the past 11 months run much deeper. They’re conquests, new firsts, sweet and painful and sometimes celebrated with tears.

Like when he turned a page in a textbook. Or laced a fork between his fingers and no longer felt embarrassed to go to a restaurant. Or strapped a stylus to his palm and typed emails back to friends and well-wishers who’ve never stopped calling. Or pushed himself in his wheelchair — not the power chair he refused to get — from room to room.

He happily remembers when he wedged a hamburger between his thumb and fingers on both hands, balanced it, raised it and took a most delicious first bite. He returned to Arizona State this past month to begin the semester of his sophomore year — a huge step for a young man whose greatest wish has become taking just one more step.

“Yeah, I’m hurt and I don’t walk and I’m in a chair, but I’m still the same kid,” Hahn, 20, said by phone from Tempe, Ariz., where he shares an off-campus home with three Sun Devils baseball players.

He will return to Orange County on Saturday for the Trinity Bat Company’s Home Run Challenge, featuring Angels slugger Mark Trumbo and Hank Conger and benefiting the Cory Hahn Fund. The charity event will be held at El Dorado High in Placentia.

Baseball used to be his life, the game that he played since his childhood, that made him the 2010 Orange County player of the year and California’s Mr. Baseball, that landed him on the gold medal-winning 18U Team USA squad, that got him drafted in the 26th round by the San Diego Padres and earned him a full scholarship to ASU.

But on Feb. 20, 2011, Hahn, playing in just the third game of his college career, took the signal for a double steal and dove helmeted-head-first into second base. A high throw came from the catcher. The second baseman landed in his path.

Hahn’s head collided into the fielder’s leg. The force fractured his C-5 vertebra in his spine, leaving him paralyzed from the chest down.

Instantly, violently and cruelly, everything — his identity, his independence, his future, his dreams he held since he was Little League, his life — changed.

Hahn remembers telling himself just after the accident, “It’s an injury. It’s catastrophic. Everything is going to be different from here on out.”

Not every part of being a baseball player has been taken from him. The drive, which once solely motivated him to spend half his lifetime polishing his game, has never been stronger.

His father, Dale Hahn, left his Orange County sales job to take care of the son he used to coach in baseball. Now, he’s coaching Cory in how to adapt to a life fraught with challenges.

The injury affected Cory’s motion from the chest down. His spine has been fused from C-4 through C-6 for stability. He hasn’t been able to move his legs. He has some function in his biceps, minute use of his triceps, some flexion in his wrists and motion of his pinky finger on his left hand.

“We’ve seen progress through Cory’s hard work,” said Dale Hahn, who has been by his son’s side through the hospitalization in Arizona and the rehabilitation for 50 days at Pomona’s Casa Colina and four months of twice-a-week sessions at both the Project Walk center in Carlsbad and the Goodwill Fitness Center in Santa Ana.

“We don’t know what the future in medicine will hold for people with spinal cord injuries, so Cory wants to keep his body ready and strong if there’s something that can one day give him a chance to walk again.”

To walk – never mind run around the bases or stomp on a home plate – is Cory Hahn’s ultimate goal. But it’s a long-range goal seemingly so far away to consider when this month the challenge has been to return to school.

“I’m happy to be back to somewhat of a normal lifestyle,” Hahn said. “But it’s different now because my life has different challenges that have been hard to get used to. I’m excited about facing these challenges.”

At 8 a.m. on Tuesday and Thursday mornings, Dale Hahn makes the drive from his Tempe extended-stay hotel to the house Cory shares with Sun Devils players and fellow sophomores James McDonald, Kasey Coffman and Trevor Williams.

“He’s my alarm clock,” Cory said of his father, who arrives, wakes him up and helps him shower and get dressed and coaches him through their daily “programs.”

On recent mornings, they have been working on transferring, or figuring out if Cory can move his body from his wheelchair to his bed or a sofa or desk chair. This takes practice, in the morning and at night.

By 10 a.m., the father and son are bound for ASU for a 10:30 a.m. macroeconomics class. Dale lifts Cory from his chair into the passenger seat of his Ford F-250 pickup, loads the wheelchair into the truck’s bed and buckles his son’s seatbelt. After a five-mile drive to campus, Dale will do it in reverse and watch Cory push himself off to class.

“It’s really important to be able to power myself,” said Cory, who texts his father once he arrives at his classroom. “I’m able to get myself around ASU because everything is flat. This is big for me because it’s independence.”

There have been so many difficult days in the past year, times when Cory admitted to getting lost in the pain of what he once had: strength, freedom, the major league-destined baseball life. He resists letting himself stew and spend too long asking, “What if?” and instead forcing himself to pack up and seal those emotions as tightly as the Ziploc bags containing his baseball medals and old jerseys beneath the bed of his Corona home.

“I have to set up goals and little victories for myself every day,” he said. “I’ve got this mentality from baseball to keep doing more, keep pushing and keep being able to tell myself that I accomplished something with my day.”

Despite the injury that forced him to withdraw from ASU last spring, Hahn has kept up with his studies. ASU allowed him to take his full course schedule online while he underwent rehabilitation in Southern California. His mother, Christine, got his assignments from the school and typed his papers as Cory dictated from the hospital bed.

Hahn continues pursuing a business degree and met his goal of getting back to school. ASU has set him up with classroom aides who take his notes and, if necessary, tutors. He is able to follow most lectures on PowerPoint on the iPad that Mater Dei gave him. He will take tests as oral exams in a private testing center.

“I find myself becoming a better listener now,” Hahn said. “The best thing is that I’m back at school and around my people my age and with the friends who never stopped being my friends. I feel normal in this part of my life again.”

His relationship with baseball, he concedes, isn’t the same. “Some days are tough because before, my life revolved around baseball,” he said.

He said he offers his roommates pointers “because this injury didn’t take away my knowledge of the game that I still want to share.” He said he hasn’t put up any baseball memorabilia in his room “because I don’t want the reminder.”

A few months ago, he took a baseball out of its plastic wrap once, an achievement in dexterity without any sports significance. He balanced the Hahn model Trinity bat at the headquarters of the Fullerton-based batmaker and tried to grip the handle before it slipped through his locked fingers.

“I have other things to learn to do first,” said Hahn, who is searching for a Tempe rehabilitation facility where he can continue his treatment and adaptive weight-training. “There are hundreds of things I want to work on to get back to normal.”

Hahn and his father are planning to drive back to Orange County for Saturday’s Home Run Challenge and visit with the friends who have supported him in his rehabilitation.

“I’ll be there,” Hahn said, upbeat and confident. “I can’t just sit around in a room and pout because life goes on and I want to keep up with it – for myself and everyone who has given me so much support.”

That will be another day, another goal and another victory.

How to help: Monetary donations are being accepted to assist the Hahn family with medical expenses. Checks made out to the “Cory Hahn Fund” can be mailed to Mater Dei High School, 1202 W. Edinger Ave., Santa Ana, CA 92707.

PHOTO BY PAUL CONNORS/ FOR THE REGISTER, TEXT BY MARCIA C. SMITH/THE REGISTER