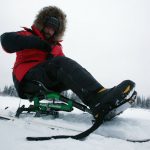 FAIRBANKS – Grant Korgan of Nevada became the first adaptive athlete in history to reach the South Pole on Tuesday, a little over a month after coming to Fairbanks to train and test equipment.

Korgan, who is paralyzed from the waist down as a result of a snowmachine accident two years ago, used a a sit-ski to push his way 75 miles to the pole in 11 days.

Korgan, 33, was accompanied by Antarctica guide Doug Stoup, Tal Fletcher and a three-person production crew who filmed the expedition.

They arrived at the pole on the 100th anniversary of Capt. Robert Falcon Scott’s trip to the pole. The team began the expedition on Jan. 8 and endured sub-zero temperatures, strong head winds and Velcro-like snow conditions. Korgan estimated he had to push the sit-ski approximately 250,000 times over the course of the trip.

“Although my body has been broken, my spirit never will be. I am unbreakable!” Korgan said in a statement posted on the crew’s website.

Korgan and his teammates spent the previous year training for the expedition, traveling to Alaska, Norway, Lake Tahoe and South America. Korgan, Fletcher and cinematographer Tom Day spent three days in Fairbanks in mid-December testing equipment and their bodies against the cold, though it wasn’t nearly as cold then as it is now. They trained on ski trails at Birch Hill Recreation Area and the University of Alaska Fairbanks.

The expedition will be made into a documentary film called “The Push” by director Steven Siig, who specializes in extreme skiing films. The film is expected to be released later this year.

“Grant just pulled off one of the most amazing athletic achievements in modern history and a first for adaptive athletes,” Siig said in a news release. “This is a historic day in the name of recovery, technology, adventure and the human potential.”

During a satellite phone interview two days prior to reaching the pole, Korgan described Antarctica as “kind of an apocalyptic place” that had a surreal beauty to it. The fact that he could feel the wind and cold on his face was invigorating, he said.

“I’m in Antarctica,” he said. “I skied with friends today. I’m able to feel how cold it is. Everything I feel is glorious.

“For me to feel that cold on my face, for me not to feel anything in my fingers, it’s glorious,” Korgan said.

The challenge was intended to help raise money for the California-based nonprofit High Fives Foundation, which helps injured winter athletes recover and get back to their sport. It also supports the Reeve-Irvine Research Center, a science research facility at the University of California, Irvine devoted to the study of repair, regeneration and recovery of function after spinal cord injury.

The Associated Press contributed to this story. Contact the newsroom at 459-7572.

Paralysed patients to have chip implanted in their brain that ‘reads’...