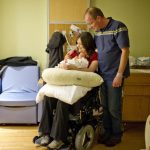 Sandra Burton would never feel the wrenching labour pains signaling her twin girls were ready to come into the world.

It was one of the many risks of her pregnancy, and the one that most worried her doctors and kept her husband awake at night.

An accident 20 years ago cost her the use of her legs and left her with minimal use of her arms. She has little sensation from the chest down.

But 11 days ago in a Hamilton hospital, Burton and her care team successfully delivered twin baby girls. It is something so seldom seen in the world that anecdotal research suggests there are no more than four or five women in Canada, the United States and the United Kingdom who are quadriplegic mothers of twins.

Burton’s doctors at McMaster University Medical Centre say they do not know of another similar case and they found little in the medical literature to guide them in her care. They also say Burton is an inspiration, someone whose life proves that seemingly insurmountable challenges can be overcome.

That motherhood would be risky never deterred Burton. Nor does she see herself, exactly, as an inspiration.

The 38-year-old from Guelph says she has always known that she would one day have children.

Burton’s life changed on an early August morning in 1991.

She and her friends were gathered around a backyard pool after a late-night party.

In what was meant to be a playful gesture, Burton’s boyfriend pushed her into the shallow end of the pool. Burton fell at a funny angle and hit her head on the cement bottom. The impact fractured the C4 and C5 vertebrae in her neck and severed her spinal cord.

Two decades later, Burton doesn’t want to talk much about the accident or the 12 months she spent in hospital learning to live with a spinal cord injury.

“I remember every minute of that year,” she says, looking away as her eyes fill with tears. “It was hard, emotionally, physically.”

At first, Burton was afraid she had lost her independence forever. But after the first painful months, a fierce determination to re-claim her life overtook that fear.

She graduated from high school. She spent five years at the University of Guelph, living in residence and studying for a Bachelor of Applied Sciences in child studies. She worked with at-risk youth. She completed a three-year Masters Degree. She learned to drive a van, one that is specially adapted to her motorized chair and can be driven with hand controls instead of a steering wheel. She has a successful career as a speech-language pathologist. She loves travelling and spending time with her friends. She is a favourite aunt to her nieces and nephews.

It is a very full life.

Seven years ago, Burton met Frank Whelan. Almost right away, she suspected that this was the man — that “right person” — with whom she would have a family.

“He is a great guy,” she says, giggling as though recalling a schoolgirl crush. “He has a great sense of humour. He’s just very genuine and down to earth.”

Whelan, a home inspector, met Burton after moving to Guelph from his Newfoundland hometown of St. John’s, hoping for a fresh start. He quickly fell for the vivacious woman with sleek brown hair and blue-grey eyes.

“From early on, I knew that we would be more than friends,” says Whelan. “We could talk about anything together, we enjoyed every moment together.”

The pair got married in a simple city hall ceremony two years ago.

Soon after, they met with Dr. Barbara Brennan, an obstetrician and maternal and fetal medicine specialist, at McMaster University Medical Centre, a regional centre for high-risk births.

Brennan told them Burton was capable of getting pregnant and carrying a baby.

Still, it was a little surprising to everyone that Burton was able to conceive naturally.

It was even more of a shock that she was carrying twins.

The biggest risk for Burton during her pregnancy was a peculiar physiological complication called autonomic dysreflexia.

It is a common and potentially life-threatening condition for those who have spinal cord injuries high up on the spine and who generally cannot feel pain. When their bodies need to communicate something strange is going on, autonomic dysreflexia, or AD as it is sometimes known, kicks in.

“If something happens to Sandra, it (AD) will send messages to her brain that cause high blood pressure, sweating, flushing, muscle spasms and anxiety,” explains Brennan, noting that labour and childbirth would like be major triggers for severe AD.

“The blood pressure elevations can be very high and very worrisome and cause very serious complications, such as stroke.”

Another major risk was that Burton would not be able to sense the start of contractions — a concern compounded by the fact that twins often are born weeks early.

“We were very worried that she would go into labour and no one would know,” Brennan says. “That she would have a violent delivery at home, or that if contractions started her body would respond with dangerous elevations in blood pressure.”

Brennan believed the best way to protect Burton and her babies was to have as much control as possible over the final weeks of pregnancy.

On Jan. 9, when she was 34 weeks pregnant, Burton was admitted to McMaster.

For Whelan, it was a frightening time. Though he tried to stay positive, he sometimes could not help thinking the worst.

Brennan scheduled a Caesarean section for 9 a.m. on Jan. 25. A contingent of doctors and nurses were in the surgical suite, ready for any complication that might arise.

For various reasons, Brennan had to make a vertical incision high up on Burton’s belly, near the upper ribs. And she had to cut into the top of the uterus, rather than the side, to reach the twins.

Usually, c-section incisions are horizontal and close to the pubic bone. The vertical cut caused twice the normal amount of bleeding, which Brennan found difficult to staunch.

Near the end of the procedure, Burton’s blood pressure skyrocketed and she had trouble breathing.

While the team managed her symptoms, Whelan stayed beside her head — despite being asked to leave — stroking her hair and assuring that all would be okay.

At 10:02 a.m., one of the doctors lifted an infant girl from Burton’s gaping belly. Her twin followed one minute later.

Both wailed, showing off healthy lungs, and each weighed just over five pounds.

Burton says the first glimpse of her daughter gave her the strength to get through the remainder of the surgery.

Whelan says he will never forget the smile he shared with his wife.

By that evening, Megan and Emma were resting side-by-side in a bassinette, tucked in close to their mother’s hospital bed.

Patti Taniguchi was overjoyed to hear about Burton’s successful delivery.

The 48-year-old from Lake Oswego, a suburb of Portland, Oregon, has never met Burton. But she is one of the few women in the world who can tell the new mom what it is like to raise twins as a quadriplegic.

Taniguchi was 18 when she fell while skimboarding — a sport similar to surfing where riders glide across the thin layer of water left on a beach by receding waves. She knew as soon as her head hit the ocean floor that her neck was broken.

Like Burton, Taniguchi re-claimed much of her life. She went to school, had a successful career, got married and had children.

Taniguchi can move her arms, but has limited movement in her hands.

She was 34 when she had her daughter, Tara. Five years later, she gave birth to twins, Nicole and Steven. Because she is able to feel some sensations, she was able to have natural deliveries.

Taniguchi could share reams of practical advice with Burton. But she also wants the new mom to know that her twins will easily adapt to her disabilities.

“When they get mobile, they will crawl all over you like monkeys,” she says, laughing at the memory of her cruising around the house with babies lying on her lap. “I thought they would roll off, but they sensed that they had to be still until I stopped.”

As her children got older — her daughter is now 14 and her twins age 9 — Taniguchi said they never got angry or embarrassed by her limitations.

Eight days after the c-section, Burton and her babies are still in hospital.

Megan and Emma are doing fine, but Burton is recovering slowly from the procedure and the stress.

When she feels well enough, Burton holds a daughter in each arm, supported underneath by pillows. She also regularly pumps breast milk for her girls.

The couple can’t wait to get home and see their twins in the lilac-coloured nursery.

They know there are challenges ahead, and that few day-to-day tasks will be easy.

But they also know they will have plenty of help — Burton’s personal support workers, a new live-in nanny and friends, family and neighbours.

And though Whelan says he and Burton have learned never look too far in the future — “we focus on today and tomorrow” — they do want to go to Newfoundland in the summer so the twins can meet their step brothers, Sam, 13, and Gregor, 8.

Burton pauses for a short time before describing what she wishes for her children.

“Because you never know what challenges will come your way.”