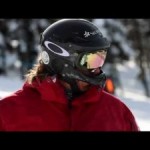 Try to imagine what it must have felt like.

Staring down at a snowy jump knowing you’d broken your neck and severed your spinal cord eight years ago trying to do a flying front flip on skis. Now you’re about to attempt a back flip while sitting on a chair with a single ski under it.

Would you do it? Would you tempt fate twice? Josh Dueck did, and he’s got the video that defies both logic and gravity

Last Friday in Whistler, B.C., the 31-year-old Dueck became the first athlete to complete a back flip in a sit ski. The amazing leap was recorded by Whistler-based producer/director Mike Douglas and put on YouTube Tuesday. Within 24 hours, Dueck’s accomplishment, as well as his story, was circumnavigating the Web. The clip was posted by ESPN.com and shown on ABC’s Good Morning America while Dueck was approached by representatives from CTV and The Ellen DeGeneres Show.

“It’s really been surprising,” Dueck said of the response.

What’s truly surprising is how Dueck was able to overcome a horrific fall then push himself to try another jump, this time while paralyzed from the waist down.

Dueck was doing his signature front flip off a freestyle jump at Vernon’s Silver Star resort eight years ago when he overshot the landing and fell 100 vertical feet landing on his face. The impact broke his neck and dislocated his back which fully severed his spinal cord. Doctors used two rods and 14 bolts to stabilize Dueck’s back. He was told he was a T11 paraplegic and would never walk again.

When he could finally manage the pain, Dueck thought of going back to a ski hill and jumping again.

“I did think about that when I was first hurt but the reality was really far away,” he said. “As I got better and talked about [doing a sit-ski back flip], it was Nicholas Bass, who used to coach with the Canadian aerials team, who said, ‘This is not only possible; it’s really easy to do.’”

Dueck returned to skiing and became a successful paralympian, winning a gold and silver medal at the X Games and a silver at the 2010 Paralympics in Vancouver/Whistler. But doing a successful back flip was a matter of unfinished business.

So he trained by jumping into foam pits at an indoor ski facility in Copper Mountain in the U.S. After three years of that, Dueck took his training leaps into a giant airbag. All the while, he was rebuilding his broken confidence.

“I told Mike [Douglas, who hoped to record the back flip as part of a documentary], ‘It’s 50-50. You may tell a story and I walk away from this. Or, I end up doing a back flip,’” said Dueck, who had to wait until last Friday for the right weather conditions to attempt his jump.

“While we were getting ready I was, ‘Wow, this jump is bigger than a Snowcat.’ A friend of mine and I went up to the top of the mountain and burned some turns and it gave me a sense of connection with the mountain,” Dueck added. “I did some speed checks [for takeoff] and I felt, ‘I got this.’” So what did those final moments before heading downhill feel like for Dueck?

“It was quite calming and peaceful. I was surrounded by so many great people and I saw them putting everything they had into that jump, it just made me comfortable.”

Dueck works as a motivational speaker, although he likes to call himself a conversationalist. He’s also a driving force with the Live it! Love it! Foundation that empowers kids with spinal cord injuries through adventures such as kayaking and bungee jumping.

“Having a spinal cord injury is not easy. But I chose to move forward and focus on the things that make me happy,” said Dueck. He is scheduled to compete in Nor-Am Cup races in Kimberley next week and at the International Paralympic Committee World Cup finals in Panorama, B.C., in March.

A homecoming to remember