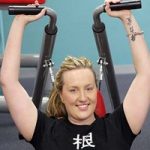 JUST over two years ago, Rhiannon Tracey was getting ready to celebrate her 21st birthday when she was told she would never walk again.

The Eltham vet nurse had just bought a car and had sent out invitations to her party when she flew to Bali for a holiday with her mother and best friend.

‘‘It was our usual girls’ trip away,’’ she says now. ‘‘It was my best friend’s birthday the night that it happened.’’

Tracey’s life changed that night when she dived into the resort swimming pool and broke her spine. ‘‘It was poorly lit and the signage was poor.’’

The accident broke four of her vertebrae, and narrowly avoided severing her spinal cord. ‘‘I was paralysed from the neck down.’’

Tracey was rushed to Denpasar hospital, where she was scheduled for emergency surgery. Then Bali was hit by an earthquake.

Fearing the hospital had been hit by a bomb, the doctors and nurses evacuated the hospital, leaving Tracey, her mother and her friend alone inside. She waited a further nine hours for surgery to fuse together her shattered spine.

Despite having travel insurance, Tracey was in hospital for two weeks before she was transferred to Australia. By then, she had collapsed lungs and her condition was deteriorating.

‘‘By the time two Aussie nurses arrived, I was on my last breath,’’ she says.

After being flown back to Australia, she was placed in an induced coma and underwent two further surgeries, placing titanium rods in her spine. She was then put into to rehabilitation at the Royal Talbot.

When she left the Royal Talbot six months later, Tracey recalls: ‘‘I was in a very dark place.’’

Yet, her family refused to give up hope. Instead, they hired private physiotherapists to give Tracey intensive physical therapy on her unresponsive limbs. As the accident took place overseas, Tracey’s family has received no compensation for her injuries.

‘‘For uncompensated people with this injury, it is ridiculous. We have to fund-raise to live.’’